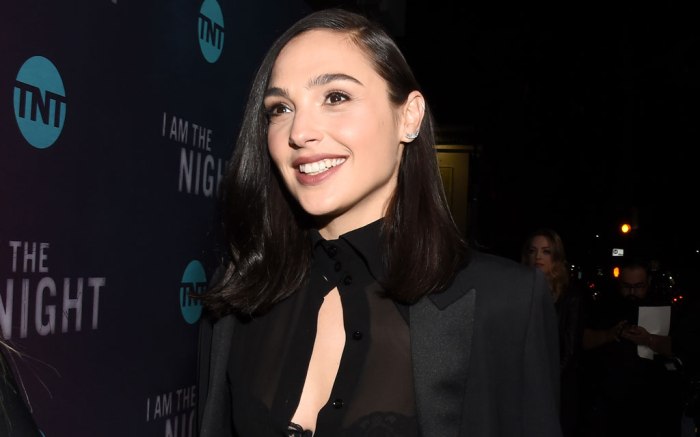 When it comes to the red carpet, Gal Gadot tends to favor classic understated style.

But at the Los Angeles premiere of TNT’s “I Am the Night” on Thursday, she proved that a cape can fit into her simple style sensibility.

The 33-year-old actress stepped out in a Saint Laurent look straight from the brand’s spring ’19 runway show sporting a pair of slim-fitting black tuxedo pants on the bottom and a black cape duster coat on the top. Underneath the cape, Gadot wore a sheer button-down shirt, which she wore with the top button undone to reveal a flash of her lacy bra.

For footwear, the “Wonder Woman” star went with a staple: strappy black sandals. The sandals were Stuart Weitzman’s Nunakedstraight style. They feature a 3-inch mid heel and retail for just under $400.

Gadot attended the “I Am the Night” premiere in support of “Wonder Woman” director Patty Jenkins and co-star Chris Pine.

Pine, who stars in the new series, posed on the red carpet in a tan suit and brown boots.

Jenkins opted for an all-black look like Gadot’s, stepping out in a black dress with bell sleeves and a high neckline. The director completed her ensemble with soaring black pumps that had mirrored heels.

Click through the gallery for a look at Gal Gadot’s head-turning red carpet style.