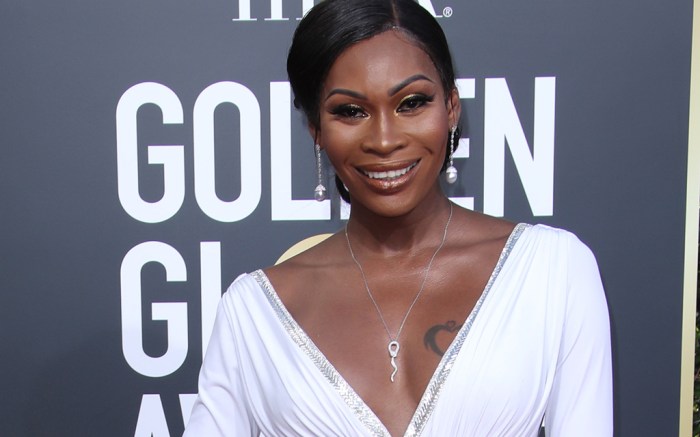 It was all about elegance and glamour for Dominique Jackson’s Golden Globe Awards look. The transgender model and actress hit the red carpet tonight in Los Angeles to kick off the 2019 awards season looking radiant in a deep-V, long-sleeved gown.

Stylist Andrew Gelwicks told FN, “When Dominique and I first started discussing the vision for her Golden Globes look, we both agreed that we wanted to highlight her figure.”

Wearing a Marc Bouwer gown and Christian Louboutin sandals, Gelwicks said finding the right shoe was critical to the full ensemble. He explained, “With this look, we opted to have the hem a little higher to still get a peek of her heels. We went with a silver Christian Louboutin [style] and it really pulls everything together. It’s glamorous, sexy and also makes a statement.” Jackson completed her outfit with Stefere & Henri Sillam jewelry and a Jeffrey Levinson clutch.

And finding the perfect dress was easier than expected, according to the stylist, but one challenge was ever present.

“This is such a groundbreaking and monumental moment for the transgender community,” he said. “I felt the biggest challenge was really finding something that would do Dominique and ‘Pose’ justice.” With two fittings scheduled, her Golden Globes gown was found in one go.

Gelwicks said, “At our first fitting in New York though we both fell so in love with this Marc Bouwer gown that we knew it was the one. We went straight from the fitting to Marc’s studio downtown and were able to discuss the final look with him.”

Jackson stars as house mother Elektra Abundance, in FX’s “Pose.” The television show, which shines light on the ball scene and LGBTQ community in 1980s New York City, is nominated for a Golden Globe in the Best Television Series — Drama category. The show, co-created by Ryan Murphy, Brad Falchuk and Steven Canals, features the largest cast of transgender actors (five, including Jackson) in series regular roles ever.

It’s a big night for the “Pose” cast as history is being made by being nominated.

Gelwicks’ advice for Jackson? He said, “I always tell my clients to not listen to the screaming photographers, stay focused, and to just enjoy the moment.”

Click through the gallery to see all the red carpet arrivals at the 2019 Golden Globes.