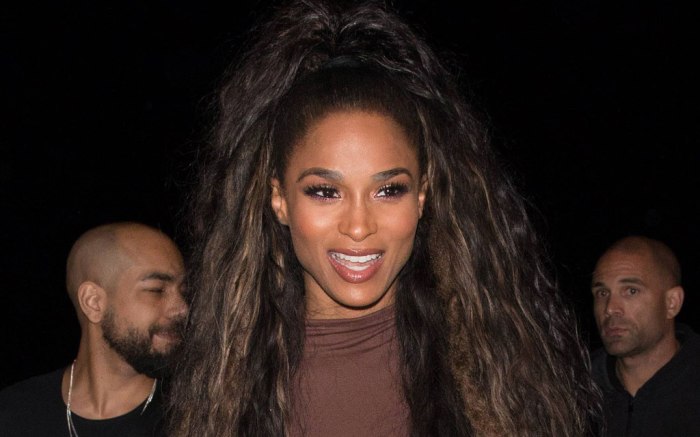 Ciara is taking combat boots to the next level.

The 33-year-old star was spotted out to dinner in Los Angeles yesterday wearing fierce boots that made a serious style statement.

To go with her shoes, the “Like a Boy” singer wore a brown bodysuit and skirt by Naked Wardrobe. But the shoes — black Prada combat boots — made the real statement. Called the Monolith, the mid-calf boots come with detachable, zip-up nylon pouches that are the perfect size for storing keys, cash or even a smartphone. The leather shoes have an oversize rubber sole with a 2.5-inch heel. They’re available to shop on Nordstrom.com for $1,450.

While the boots are certainly a statement maker, Ciara isn’t the first A-lister to give them a whirl. Bella Hadid wore them  during Paris Fashion Week in September, pairing them with a pink blazer, jeans and a New York Yankees cap.

Although combat boots were once thought of as anti-establishment, they’re nearly ubiquitous today, favored by “It” girls like Kendall Jenner, Irina Shayk and Hadid. Still, the Prada boots offer a more extreme take that differentiates itself from the rest — and it’s celebrity approved.

Click through the gallery to see how Ciara’s style has evolved over her years in the spotlight.