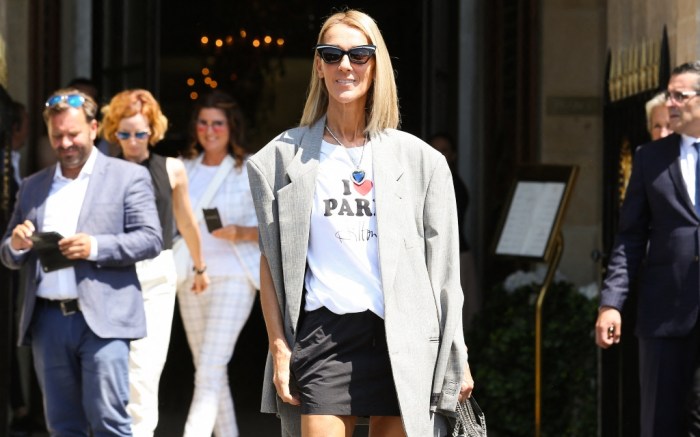 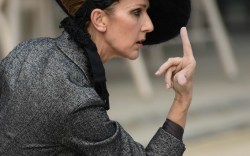 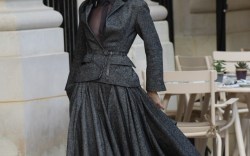 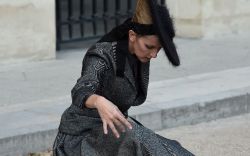 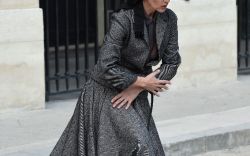 Celine Dion has taken Haute Couture Week in Paris by storm with her many head-turning ensembles.

A day after attending Alexandre Vauthier’s show, the Canadian music icon was snapped leaving her hotel in a white graphic tee with an oversized gray blazer featuring open sleeves.

At first glance, it looks as if Dion’s shirt simply reads “I Love Paris” — but upon further inspection, one will be able see the famous Hilton name written in marker just below the print.

Dion, who’s been working with stylists Pepe Muñoz and Sydney Lopez, also showed off her long legs in a short black miniskirt, which she paired with classic pointy black leather pumps. She further accessorized with a diamond sapphire heart pendant necklace and sleek cat-eye shades.

Throughout the week, the superstar has been generating major attention with her ensembles, as she attends events at Haute Couture Week. (She was also in town for the European leg of her world tour).

On Tuesday, the “My Heart Will Go On” hitmaker made waves at French designer Alexandre Vauthier’s couture presentation, modeling an ivory off-the-shoulder minidress boasting oversized balloon sleeves and a pair of strappy gold metallic stiletto sandals.

After his presentation, Vauthier made a beeline for Dion in the audience to share a moment of mutual appreciation.

Dion’s final stop on her European tour is London for a show on July 5, after which she’ll spend the fall performing around her native Canada.