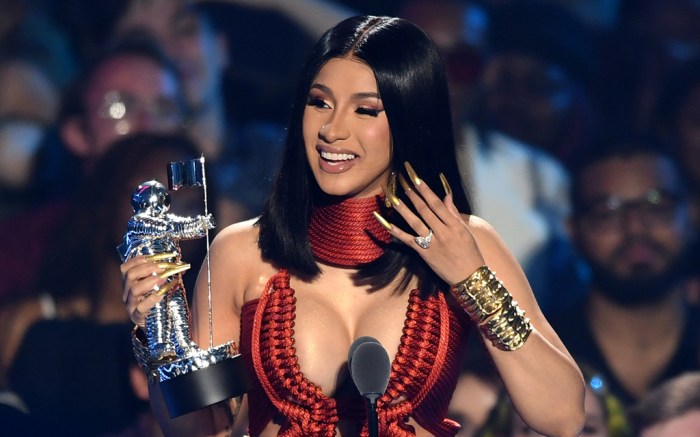 Cardi B wore two pairs of gold sandals Monday night for the MTV VMAs — one while accepting her award and the other at the after-party.

The “Bodak Yellow” entertainer skipped the red carpet but still managed to make a big impression with her look, appearing twice onstage at New Jersey’s Prudential Center to accept the Best Hip-Hop Award and present Missy Elliott with the Video Vanguard Award.

The 26-year-old looked fierce in a red Déviant La Vie dress with lace-up detailing at the back and an unconventional train. For shoes, she selected gold Christian Louboutin cage sandals with spikes along the laddered straps.

The shoes featured a 4.5-inch stiletto heel and Louboutin’s signature red lacquer sole; the style is offered at Nordstrom.com for $1,245.

She completed her look with gold Saint Laurent jewelry.

Later in the evening, the “I Like It” rapper returned to New York to party the night away. Cardi tried out one of the season’s biggest trends — snake print — for the festivities. She wore a one-shouldered, knee-length, python-print dress from Fashion Nova.

The Grammy winner also opted for some subtle snake-inspired flair on her pedicured. Her gold Tom Ford sandals were made of python, with a leather lining, the brand’s signature padlock detailing and a 4.1-inch stiletto heel. The style is selling for $1,390 on Neimanmarcus.com.

Click through the gallery to see more celebrity style at the 2019 VMAs.

Watch the video below for a behind-the-scenes look at Meek Mill’s FN cover shoot.