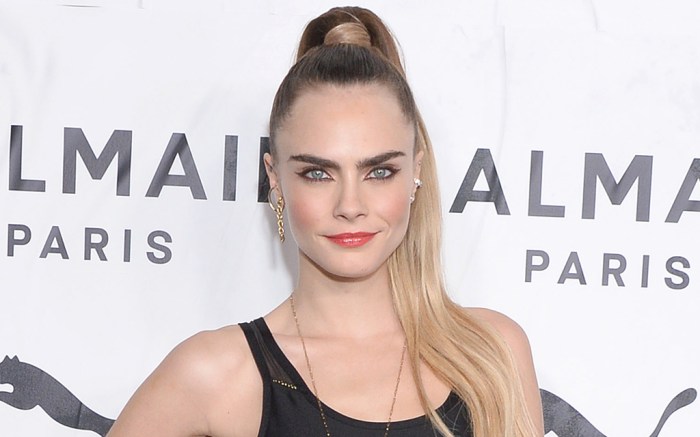 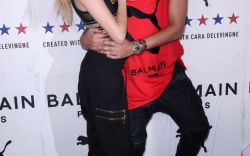 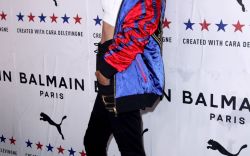 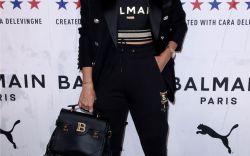 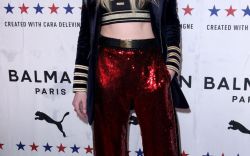 Last night, Puma joined French fashion powerhouse Balmain and one of the world’s biggest supermodels, Cara Delevingne, to launch their inaugural collaboration with a splashy party in Los Angeles.

Delevingne attended the event in designs from the new capsule, including a branded sports bra and jogger-style pants with side zippers. Under the pants, she wore black fishnet tights, a layering piece that’s been trending in a major way this fall.

The model-turned-actress paired her fishnets with suede pointed-toe pumps on a tall heel.

Delevingne was joined by Balmain’s creative director, Olivier Rousteing, who wore a red tank top from the collab along with black pants as he planted a kiss on his friend’s cheek.

The collection of footwear, apparel and accessories will be carried in Puma stores and on Puma.com, as well as at select retailers. Balmain will also stock a selection of items from the line at its own boutiques.

“We sold to about 10 accounts in the U.S., including the Madison stores in Beverly Hills and Malibu, Calif. Hopefully, we do more stuff with them in the future because it has been a huge moment for the brand,” said Frank Alva, Puma’s account executive for select West Coast retailers. Madison was also among the top accounts for the Puma x Fenty collections.

Also in attendance at the star-studded launch party were Alessandra Ambrosio and Eva Longoria. Ambrosio wore a cropped top, red and a blue bomber jacket, and black pants from the collab that she paired with chunky lace-up heeled booties.

Longoria also wore a cropped top from the collection under a black blazer, paired with the same jogger-style pants as Delevingne. She accessorized with a Balmain handbag and a pair of pointed-toe, stiletto booties.

Click through the gallery to see all the celebrity arrivals at the Puma x Balmain x Cara Delevigne launch party.