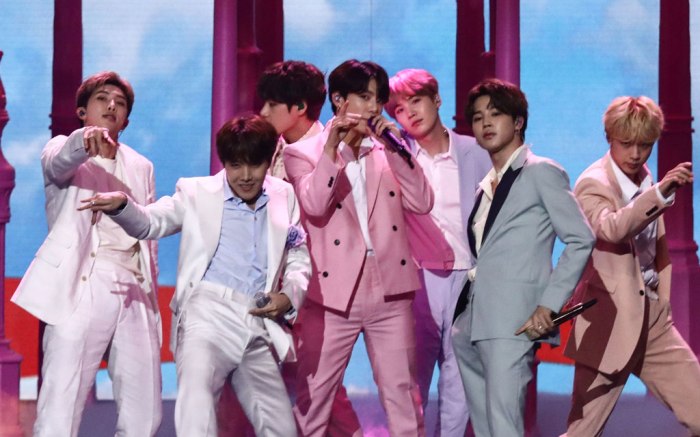 The holiday season has officially arrived, and the boys of BTS are providing major Christmas party inspiration.

The seven members of the K-pop group — Jungkook, Jimin, V, Suga, Jin, J-Hope and RM — arrived at the Melon Music Awards in Seoul on Nov. 30 clad in coordinated outfits in wintry shades.

Jin, Jungkook and Jimin wore black outfits. Jin and Jimin added a pop of white with button-down shirts under their suits, while Jungkook’s all-black look got a bit of color courtesy of his freshly highlighted red hair.

Suga and J-Hope both looked stylish in gray. Suga wore a sparkly gray sweater over pinstripe pants. J-Hope sported a double-breasted gray blazer with a belt around the waist.

Meanwhile, RM wore a brownish gray waistcoat over shiny pants, into which he tucked his button-down shirt.

V went for a more colorful look in a red cardigan similar to Mr. Rogers’, which he layered over a charcoal gray suit. All seven boys wore shiny black dress shoes on their feet.

BTS took home all of the biggest honors of the Melon Music Awards, for artist of the year, record of the year, song of the year and album of the year, as well as some smaller awards such as best dance performance.

After hitting the red carpet, the boys did an outfit change for an appearance onstage, performing a medley including their hit “Boys With Luv.” The entire set, which lasted more than 30 minutes, was uploaded to the septet’s YouTube channel.

Click through the gallery to see more of BTS’ red carpet and performance style.