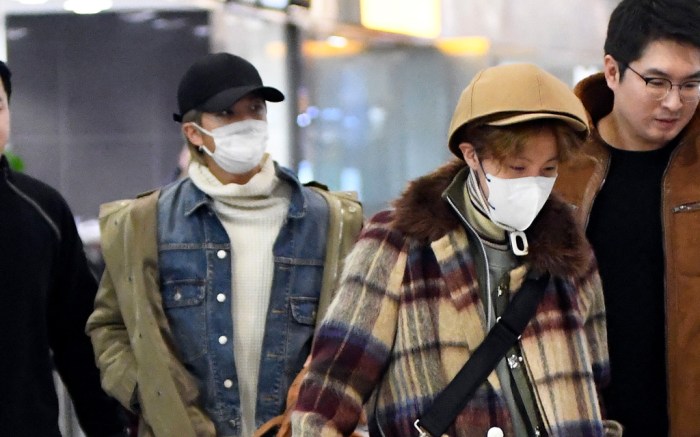 The seven-member group landed at John F. Kennedy Airport today ahead of their performance on “Dick Clark’s New Year’s Rockin’ Eve With Ryan Seacrest,” which will be broadcast Tuesday night in New York’s Times Square. Group members Jin, Suga, J-Hope, RM, V, Jimin and Jungkook showed off their unique styles as they stepped off the plane surrounded by security.

One bandmate chose an all-black ensemble with a zip-up jacket and black-and-white chunky lace-up sneakers.

His bandmate went for black leather brogues, and he, too, wore all black with a knee-length peacoat and a newsboy cap.

Adding a pop of color, one singer went with olive green tailored trousers, paired with a light gray sweater and darker gray cardigan-style coat; his shoe of choice was black leather loafers with a gold horsebit detail and a folded-down back.

Another BTS star mixed it up in a plaid coat with a furry collar, layered tops, camel chinos and matching camel work boots with an orange sole and an orange hangtie.

Another member looked warm in a turtleneck sweater with a jean jacket and a green coat over dark jeans. He brought out a pair of rare red and maple sneakers for the occasion. The Nike Mars Yard 2.0 retailed originally in 2017 for $200, but it resells now for up to $4,850 on sites like StockX.

BTS recently partnered with Fila on its first collaborative ad campaign with the brand; more images are set to be released in 2020. The group became brand ambassadors last October.

Click through the gallery to see more of BTS’ best style moments of the year.