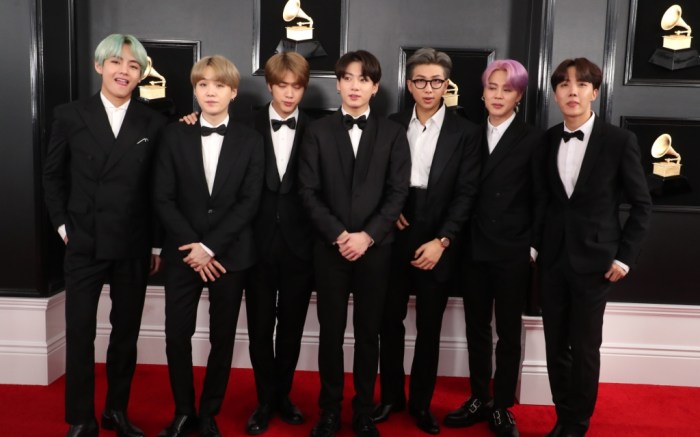 Leave it to BTS to pull off coordinated, dapper looks at the Grammy Awards.

The K-pop group arrived in stylish black suits and shiny shoes at tonight’s awards show at the Staples Center in Los Angeles. They all wore sleek tuxedos, bringing some slight variety to their outfits with some wearing bowties and others going tie-free.

A few of the boys added pops of color to their look with their hair,  Jimin rocking a bright pink hairdo and V showing off a vibrant mint green ‘do.

BTS was nominated for a Grammy Award for best recording package, marking the first time a K-pop group was up the top music honor. While the boys did not win the award — Willo Perron nabbed the honor for St. Vincent’s “Masseducation” album — they will present later at the televised ceremony.

Other stars are also beginning to step out for the big event, which is hosted this year by Alicia Keys. Performers tonight include Miley Cyrus, Lady Gaga and Shawn Mendes, among others.

Click through the gallery to see more celebrity arrivals at the 2019 Grammy Awards.

The Wildest Shoes Ever Seen on the Grammy Awards Red Carpet