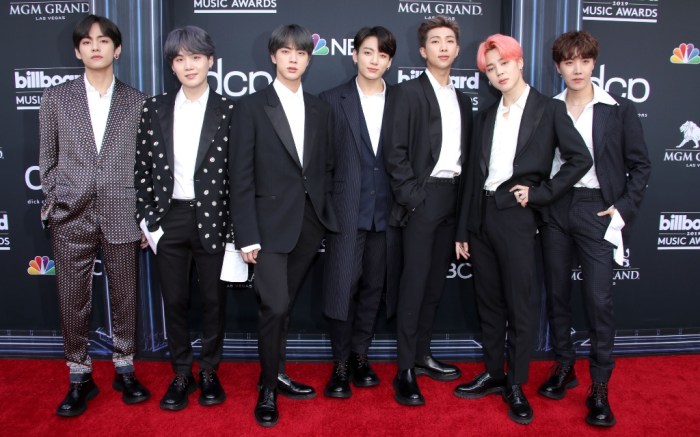 Flashing cameras and crazy screams from fans can only mean one thing: BTS has arrived at the 2019 Billboard Music Awards in Las Vegas.

Band members Jungkook, Jimin, V, Suga, Jin, J-Hope and RM made their way onto the red carpet, each rocking their own individual take on a suit. While some wore classic tailored black-and-white ensembles, there were pops of polka dots, pinstripes and mixed patterns as well.

The seven singers all chose variations of black dress shoes and leather boots, showing with their coordinated vibe.

The K-pop sensation group is set to perform at the show tonight alongside Halsey to sing their new song “Boy With Luv.” Halsey gifted BTS with matching pink friendship bracelets yesterday in honor of their upcoming performance.

Click through the gallery to see all the celebrity arrivals at the 2019 Billboard Music Awards in Las Vegas.

The BTS Boys Look Like the Ultimate Hypebeasts in New York