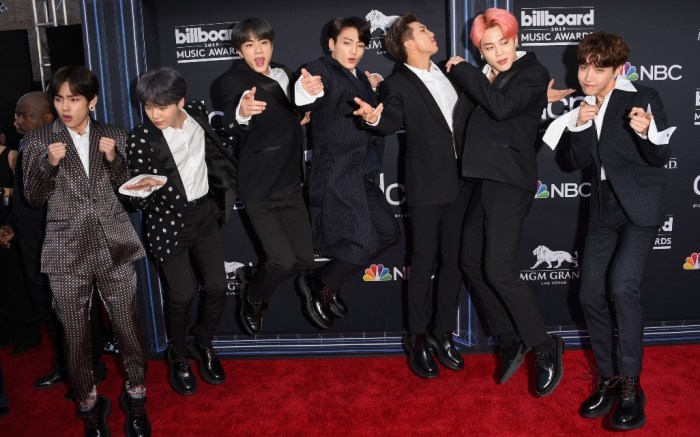 BTS was one of the most anticipated groups at the Billboard Music Awards in Las Vegas last night, and they did not disappoint with their red carpet style.

The seven boys — Jungkook, Jimin, V, Suga, Jin, J-Hope and RM — looked fashionable in coordinated suits with shiny black shoes as they worked it for the cameras.

While fans were excited to see BTS, the bandmates were eager to get photos with, well, everyone else. The K-pop phenoms poked their way into images with many of the biggest stars. Below, we’ve rounded up seven celebrities who BTS posed with at the 2019 BBMAs.

Ciara looked chic in a Stephane Rolland fall ’18 gown and strappy black sandals as she hit the red carpet with 4-year-old son Future (adorably clad in Versace). The duo even managed to grab a red carpet photo with BTS (last image in the gallery).

That boy fresh 😎. #Versace. Hubby flew straight from practice and surprised me! I had no idea! My babies always bring me good vibes. #SoonSiennaWillBeAbleToSitStillFor3Hrs @DangeRussWilson #BBMAS  #ThinkinBoutYou #BTS

“Shower” singer Becky G stopped for a photo with BTS in the group’s dressing room. She looked stylish for the picture in a sparkly silver minidress and black ankle-strap sandals.

‪Almost wanted to cry when @sherinnnnnn told me @bts.bighitofficial wanted me to come down to their dressing room to hang out…. like what is life. THEY’RE SO NICE 🥺😩🙏🏽❤️ #BTSArmy ‬#BBMAs

Terry Crews attended the BBMAs in a tan suit with bold knee-high black boots. The “Brooklyn 99” actor posed for a fun selfie with a few of the BTS boys, cheesing it up big time for the camera.

With BTS performing “Boy With Luv” alongside Halsey, it’s no surprise that they got plenty of snaps with her. The “Bad at Love” songstress performed onstage in an oversize tan suit with a white crop top underneath.

Post-performance pics with the squad #BBMAs

Drake and Cardi B

Celebrating their success in the press room, BTS even managed to get pictures with Drake and Cardi B — two of the biggest winners of the night.

Could a Drake x BTS collab happen? 🤔 Link in bio to find out what BTS told us at the #BBMAs.

Madonna danced onstage in an eye patch and strappy black pumps. Backstage, the pop icon managed to make time for a picture with the K-pop group.

Click through the gallery for more celebrity style on the BBMAs red carpet.

Watch the video below to see celebrities at the FNAAs through the years.

Worst-Dressed Celebs on the Red Carpet at the 2019 Billboard Music Awards, According to You