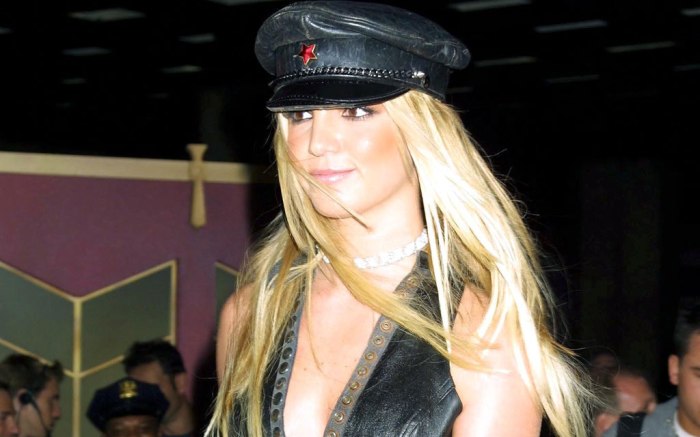 While a lot of things have changed during that time span, one thing’s remained steady: Spears’ willingness to wear daring ensembles on the red carpet.

At the MTV Video Music Awards in 1999, Spears showed off her signature sultry-meets-sweet red carpet style. She wore a see-through duster with feather trim, going shirtless underneath. With feather trim narrowly preventing a wardrobe malfunction, the star completed her look with black pants and satin sandals.

Another daring look came at the MTV VMAs in 2001, two years later. At that event, Spears wore a see-through lace minidress that barely covered her upper thighs. She paired the sensual dress with strappy black low-heeled sandals.

The performer sang onstage in an even more daring look, draping a yellow snake around her shoulders as she performed “I’m a Slave 4 U” in a green bejeweled bikini.

That same year, Spears stepped out on the red carpet in an instantly iconic denim-on-denim look alongside then-boyfriend Justin Timberlake at the American Music Awards. The 37-year-old wore her strapless denim gown with a thick choker, while Timberlake complemented his Canadian tuxedo with a denim cowboy hat.

The 2001 AMAs weren’t the only time Spears went with a costume-like red carpet look. At the 2002 VMAs, she stepped out in a black minidress with a leather bodice and sheer paneling at the side. She completed her look with black pointy-toed pumps that featured straps going up to her knees.

In the 2010s, Spears continued to show off her toned body in daring red carpet looks.

At the 2016 Billboard Awards, she put a more modern update on her 2002 VMAs outfit, picking a see-through Reem Acra dress that revealed her underwear underneath. The “Toxic” singer paired the leg-baring dress with Schutz cage boots that went past her knees.

And in 2018, Britney Spears made a splash at the GLAAD Media Awards in an ultrashort, sparkly minidress, which she paired with see-through, pointy-toed pumps.

Click through the gallery for more of Britney Spears’ most daring red carpet looks.

Britney Spears: A Look at Her Onstage Shoe Moments

Britney Spears’ Feet Slip Out of Her Sandals, but She Keeps on Walking