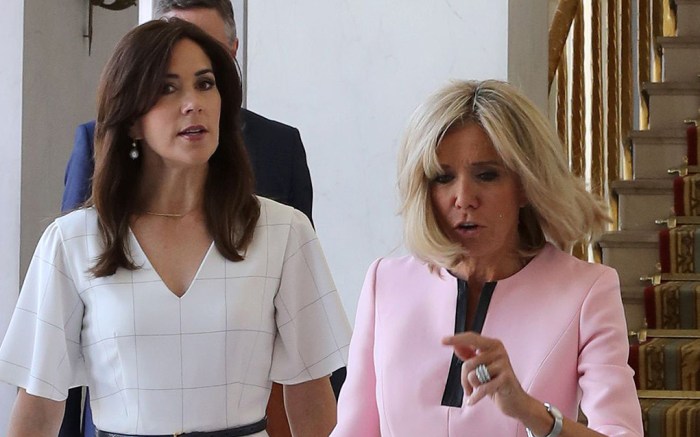 France’s first lady Brigitte Macron (née Trogneux) is a pro in stilettos and has mastered how to maneuver in them gracefully. Her mastery was on show today when she welcomed Crown Princess Mary of Denmark during a state visit in Paris. It certainly helped that Macron was in her go-to brand, Louis Vuitton.

The 66-year-old had on a pink shift dress with black piping down the center of the bodice. For her shoes, the former schoolteacher chose the French luxury house’s Eyeline pumps. The black shoes feature a pointy toe and a 4-inch stiletto heel that had gold detail at the counter. The shoes retailed for $825, but are sold out. However, some resale websites like Poshmark.com offer the pumps in its marketplace.

Macron led the princess on a tour of Elysee Palace, where she helped her ascend the stairs — which could’ve been a precarious situation as Mary was teetering on nearly 5-inch pin-thin heels. While holding Mary’s elbow, Macron kept her eyes on the steps and made her way to the entrance by moving her legs from side to side.

Meanwhile, the Danish royal looked elegant in a white windowpane-pattern dress with navy pumps and a matching clutch.

In June, French president Emmanuel Macron’s wife had on the same pumps in tan while at the 75th anniversary of D-Day at the Normandy American Cemetery in Colleville-sur-Mer, Normandy, France, alongside first lady Melania Trump.

See Brigitte Macron’s love affair with shoes over the years.