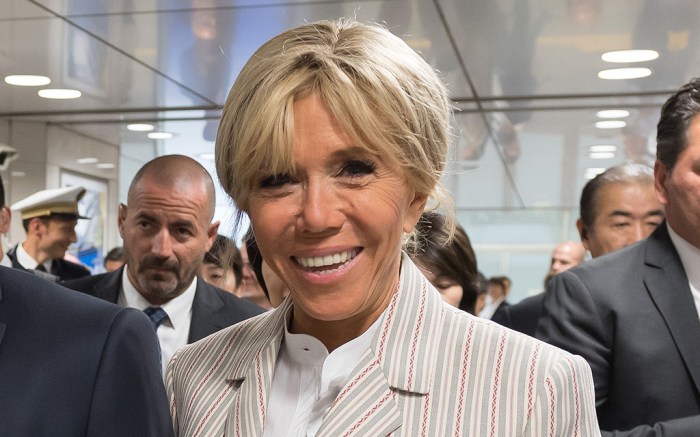 Change is a good thing, and France’s first lady Brigitte Macron (née Trogneux) is a good example. The wife of French President Emmanuel Macron made a departure from her usual style today when she joined her husband at the G20 Summit in Osaka, Japan.

Shift dresses are a favorite of the former schoolteacher, who wears the silhouette often while performing her duties — and it’s Louis Vuitton’s Eyeline pumps that have completed her looks many times.

On this occasion, however, she left them behind and stepped out in the luxury house’s modern, graphic Matchmake pumps instead of her go-to classic Eyeline stilettos.

The Matchmake style features white leather at the front countered by Vuitton’s iconic monogram in brown canvas around the counter and throughout the 4-inch block heel. The monogram print continues on a strap at the midfoot contrasted by a companion black strap. The pumps retail for $1,030 on Louisvuitton.com.

The heels were the perfect complement to her menswear-inspired suit done in beige with muted red and green pinstripes.

Earlier in the day Brigitte had a meeting with Japan’s Empress Masako at the Imperial Palace in Tokyo, where she had on a navy blue dress with Vuitton’s Eyeline pumps. She has many variations of the model and opted to wear the shoes in blue satin.

See Brigitte Macron’s love affair with pumps and boots over the years.