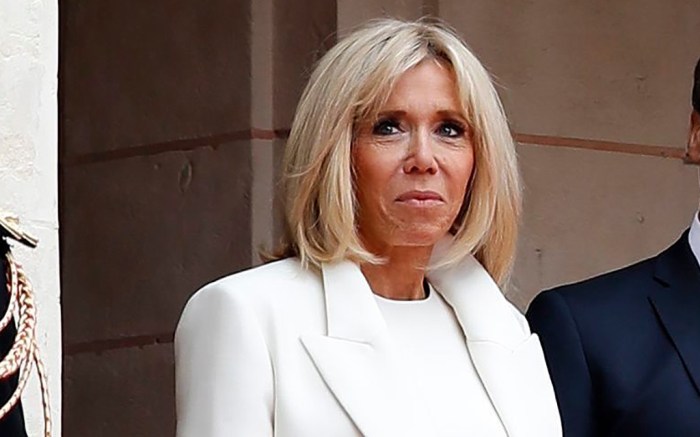 France’s first lady Brigitte Macron (nee Trogneux) proved cemetery attire doesn’t have to be demure. Today, the wife of French President Emmanuel Macron arrived in an outfit that stood out at the 75th anniversary of D-Day at the Normandy American Cemetery in Colleville-sur-Mer, Normandy, France.

Traditionally, funeral dress codes are rather subdued — with palettes that range from black to dark blue —  but Brigitte played by her own style rules by opting to wear white. The 66-year-old former teacher had on a coat over a cocktail dress with brown Louis Vuitton pumps.

The French fashion house’s shoes feature a straight 4-inch heel with a gold ring around the counter and a pointy profile. She often reaches for Vuitton heels while performing her duties as first lady.

There are many reasons why Brigitte could’ve selected white rather than black or a dark color, but the hue does have a significant meaning when it comes to honoring the dead. It has been said that white clothing represents purity and can be the color of mourning periods in different cultures.