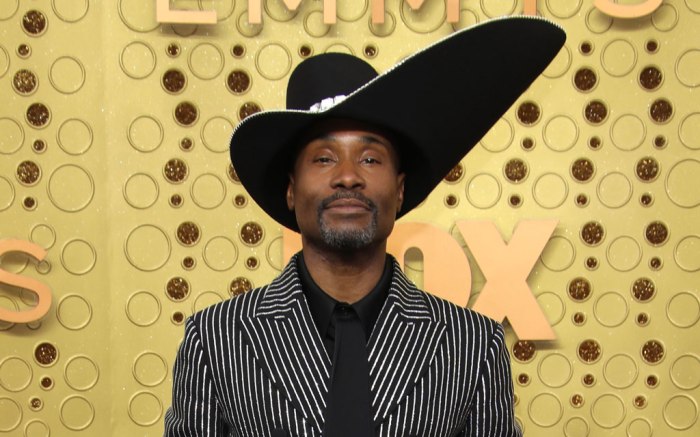 When it comes to red carpet dressing, no one knows how to make a statement quite like Billy Porter.

The “Pose” actor, 50, wore an eye-catching look — a sparkly, pinstriped Michael Kors pantsuit and platforms with a most unusual winged cowboy hat — at the 2019 Primetime Emmy Awards at the Microsoft Theater in Los Angeles tonight.

Platforms are trending in a big way for fall — thanks to top shoe labels such as Givenchy, Gianvito Rossi and Jimmy Choo. The soaring silhouette provides a boost with more stability than a stiletto, leading to a feeling of empowerment for the wearer.

The A-lister completed his look with an asymmetrical hat and long, fringed tie. He won in the category of Outstanding Lead Actor in a Drama Series for his work on “Pose.”

Porter become well-known for his risk-taking, androgynous style at the 2019 Academy Awards. For the Oscars, he hit the red carpet in a custom black tuxedo gown by Christian Siriano. His winning style streak continued at the Met Gala, where he arrived on a bed (or a litter, pharaoh-style), carried by six shirtless men, all of whom were decked out in gold jewelry and face coverings. Porter’s own look was Egyptian sun god turned butterfly, complete with custom bedazzled Giuseppe Zanotti boots.

For the fourth time in Emmy history, this year’s ceremony did not have a host. However, big names are among the presenters, including Zendaya, Viola Davis and Michael Douglas. Departing television programs, most notably “Game of Thrones,” were honored throughout the night.

Click through the gallery to see all the celebrity arrivals at the 2019 Primetime Emmy Awards.