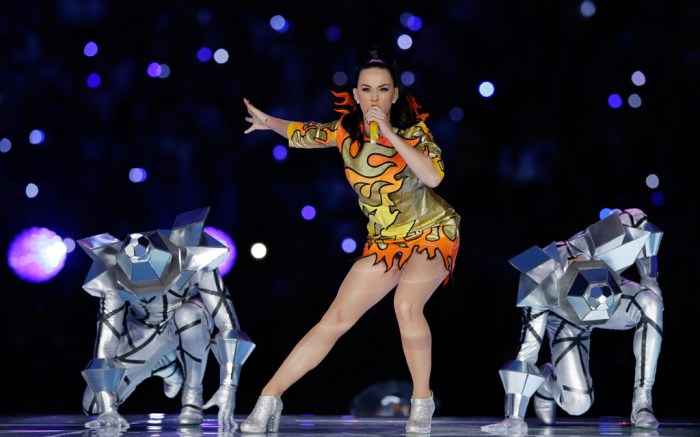 For many viewers, the halftime show is the main reason to watch the Super Bowl.

With big name stars taking the stage each year like Maroon 5 and Travis Scott, who perform at Super Bowl LIII this Sunday from Atlanta, fans can expect over-the-top wardrobe and sets.

While there have been many dazzling onstage looks over the years, some stand out more than others.

One memorable moment was in 1993, when Michael Jackson performed in a military jacket with gold detailing and skinny trousers. On his feet, the music legend sported his iconic white socks and black penny loafers. He accessorized with a pair of gold aviator sunglasses.

In 2016, Beyoncé paid homage to the King of Pop with her look as she made a surprise appearance on stage alongside Maroon 5 and Coldplay. The Grammy winner wore a DSquared2 jacket and harness inspired by Jackson’s look, which she wore over an Ashton Michael bodysuit. The star completed her look with black ankle boots designed by Christian Louboutin.

Just a year earlier, Katy Perry commanded attention in four Jeremy Scott-designed outfits as she brought down the house with her own halftime set. The “California Gurls” singer paired the elaborate looks with shiny Swarovski crystal–embellished booties by LaDuca. The heels were encrusted with 12,600 crystals, making them a real standout.

Another memorable high-fashion moment was in 1996, courtesy of Diana Ross. The songstress pulled off a look that only she could: An embellished pink catsuit with a plunging neckline and a gold cape that even fans in the nosebleeds couldn’t miss. She later changed into an elaborate orange and pink gown that was equally elaborate.

Click through the gallery to see more iconic fashion moments at the Super Bowl over the years.