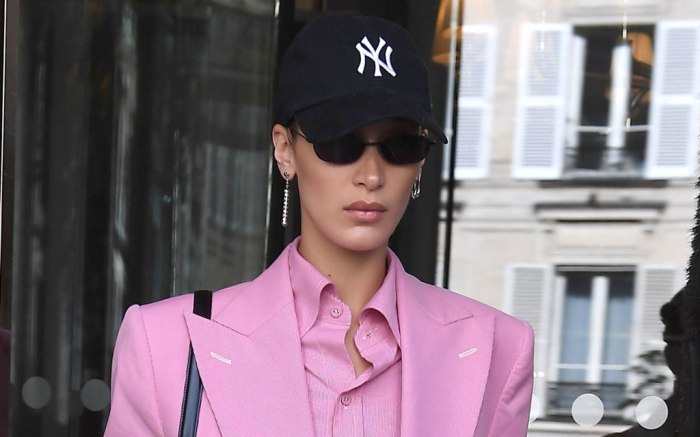 The 22-year-old supermodel wore a pink blazer over a matching button-up shirt, which she tucked into a pair of mom jeans.

For footwear, Hadid went with Prada’s Monolith boots, which come with detachable mini nylon pouches. The shoes have a leather upper, a rubber sole and a 2.75-inch flatform. They’re available to shop on Nordstrom.com for $1,450.

The catwalker completed her look with a shiny black mini bag, dark sunglasses and a New York Yankees baseball cap ($25 from Nordstrom.com).

Combat boots have enjoyed a surge in popularity amid the reemergence of ’90s fashion. The style adheres to the grunge movement that popped up in the decade, buoyed by Seattle-founded bands such as Nirvana and Soundgarden.

Hadid herself has long been a fan of combat boots — especially Dr. Martens. She and sister Gigi frequently step out in the British brand’s work boots.

When she’s not clad in combat boots, the Dior Beauty ambassador likes to wear sneakers from Converse, Nike and Yeezy. For more formal appearances (like on the red carpet), she favors high heels, with go-to labels including Gianvito Rossi and Christian Louboutin.