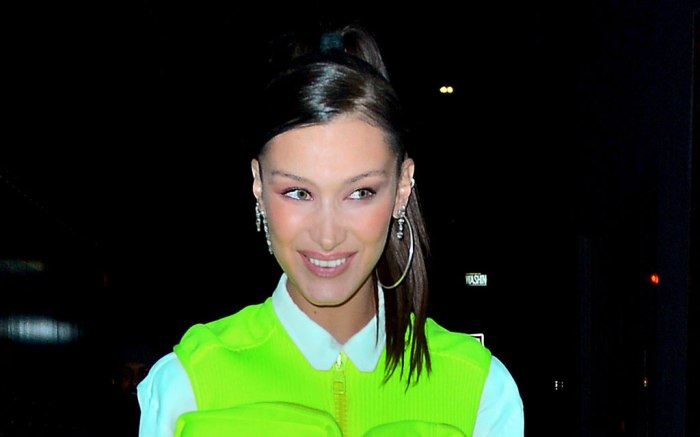 The Nike ambassador put her long legs on display, completing her look with trendy Louis Vuitton Archlight sneakers. The futuristic sneakers feature a wave-shaped outsole, with a low-cut at the ankle for a feminine touch. Hadid’s mostly white pair featured LV’s signature monogram detailing. The shoes — which have gained celebrity fans like Jaden Smith and Hailey Bieber — retail for $1,090.

For her beauty look, she went with a smoky eye and blush-colored lips, and wore her brunet locks in a high ponytail. She finished off her outfit with asymmetrical earrings.

During the party, Hadid took to her Instagram Stories to provide her 22.2 million Instagram followers with a glimpse inside the event. She showed off an avant-garde dish on the multicourse menu, posed alongside cookbook author Martha Stewart and filmed Louis Vuitton menswear designer Virgil Abloh at the DJ table.

Following the event, the Dior Beauty ambassador took to Instagram to share black and white images of her and pal Jesse Jo Stark posing in front of a wall. “@louisvuitton, @chromeheartsofficial that’s all!” she captioned the post.