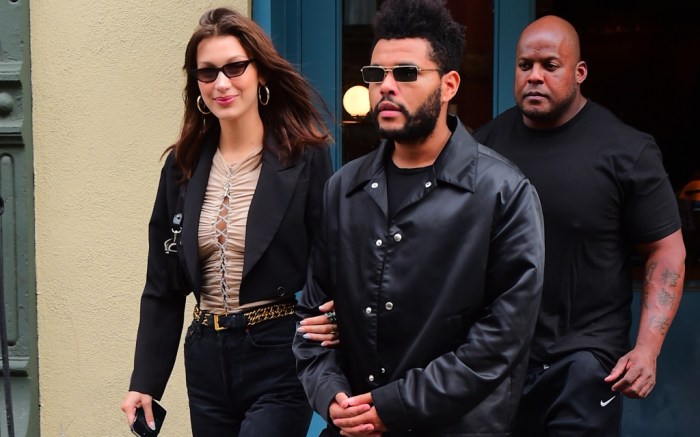 Bella Hadid sported a predictably skin-baring look as she stepped out to boyfriend The Weeknd’s New York birthday party on Friday.

The 22-year-old Dior Beauty spokeswoman was clad in a camouflage bra and olive-green miniskirt, which she wore layered with a long jacket. For footwear, the Nike ambassador went with stiletto lace-up booties, adding a sensual element underneath with sheer knee-high Prada socks.

1 minute til my favorite day of the year…. @theweeknd

She pulled together her look with silver-tone hoop earrings and two necklaces.

The party was camo-themed, and the Weeknd wore a similar look to his girlfriend’s. The “Can’t Feel My Face” singer — who turns 29 today — rocked a camo zip-up jacket with matching pants, finishing his ensemble with dark work boots.

“1 minute til my favorite day of the year…. @theweeknd,” Hadid captioned her Instagram tribute to the R&B crooner, posted just before midnight. The image racked up more than 1.4 million likes.

For Hadid, the past week has been a busy one. The supermodel walked in several of the biggest shows at New York Fashion Week, for brands including Michael Kors, Anna Sui and Oscar de la Renta.

Watch a behind-the-scenes video of Hadid’s cover shoot for FN:

Bella Hadid Show Us How to Pull Off Winter White