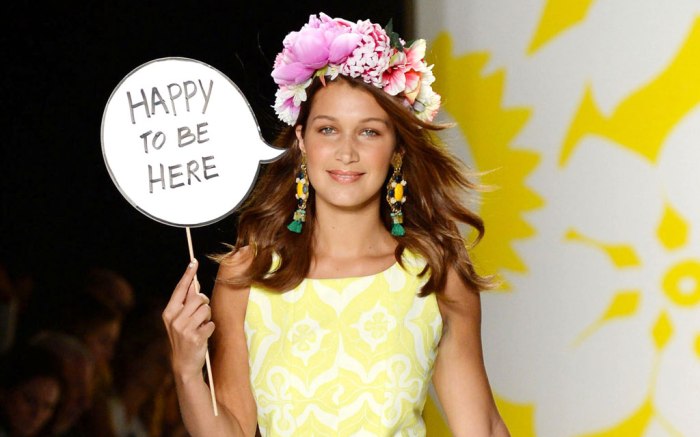 Bella Hadid is one of the most sought after models in the industry — and that means she walks tons of runway shows each season, many of them alongside older sister Gigi.

She walked for the Spanish brand’s spring ’15 show at New York Fashion Week in September 2014.

The Nike ambassador sported two looks in the show.

Her first was a fitted yellow and white frock, which was paired with blue and yellow platform sandals. The look was completed with a flower headband and a bubble reading “Happy to be here” in uppercase font.

She then donned a floral button-up cardigan with matching shorts and hot-pink knotted sandals. She finished her ensemble with a floral headdress and dangly statement earrings.

Although Hadid has been in many shows with her older sister, Gigi was not among the models to appear at the spring ’15 Desigual show.

Nonetheless, the show featured a big star in supermodel Adriana Lima. The Brazilian bombshell sported several looks, including a batik minidress that was teamed with hot-pink knotted platform sandals, a patterned handbag and a flower-adorned headband.

Hadid and Lima most recently walked the same runway in November, when they both appeared at the Victoria’s Secret Fashion Show in New York. This marked Lima’s final VS Fashion Show after nearly two decades walking for the brand.

Click through the gallery to see some of Bella Hadid’s best street-style looks through the years.

Bella Hadid Shows Us How to Pull Off Winter White