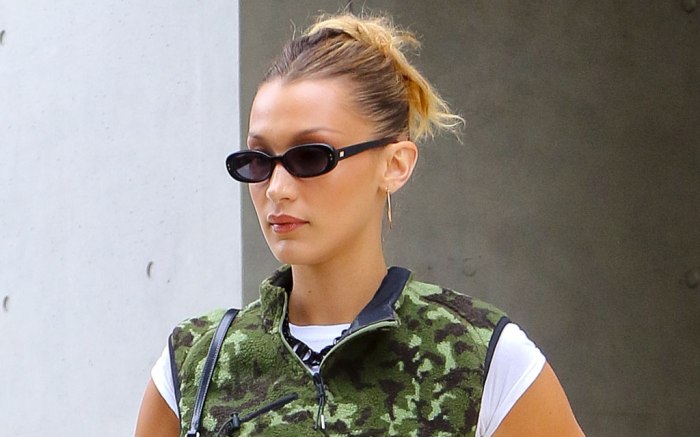 Bella Hadid made the case for camo as she hit the streets of New York yesterday.

The 22-year-old model wore a camouflage vest with  zip-up detailing and oversize pockets, a white T-shirt and light-wash mom jeans.

The military theme continued from the vest down to Hadid’s feet. For footwear, she selected A$AP Nast x Converse Jack Purcell sneakers in “Beechnut” green.

The shoes feature an upper made of durable canvas, with contrasting black accents on the laces and at the rubber midsole, which extends up to the mudguard and heel counter. Finishing the look is a Converse One Star logo at the heel. The limited-edition sneaker, which dropped in March for $100, is sold out at retail. However, it’s available online at StockX.com, with some sales going for less than $60.

Hadid has worn camouflage before. For instance, she stepped out in an oversize camo-print shirt, black pants and cakestand heels at the airport in June. She completed her look with orange-tinted shades and gold hoop earrings.

The Dior Beauty ambassador also suited up in camo for then-boyfriend The Weeknd’s birthday party in October 2018. She wore a matching set that consisted of a crop top and miniskirt, which was paired with tan work boots set on a slim stiletto heel.

When she’s off-duty, Hadid loves casual shoe styles from brands like Dr. Martens, Ugg and Nike. For appearances on the red carpet and at other events, stilettos are her preference — from top designers Gianvito Rossi and Christian Louboutin, and others.

Bella Hadid Elevates Her Bikini Style With Jewelry for the Feet