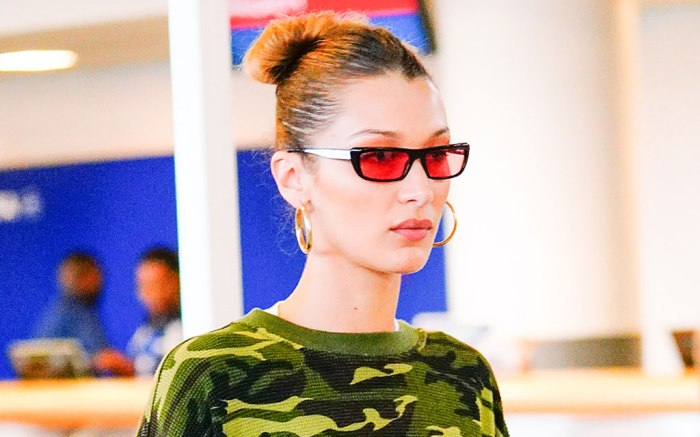 Bella Hadid is constantly on the go, and over the years it seems like she’s developed a stylish formula for the airport.

The 22-year-old arrived at JFK Airport in New York today wearing a casual-cool outfit that managed to be simultaneously comfortable and chic.

On her feet, the supermodel sported a pair of sleek black boots with architectural cakestand heels. The boots featured a square toe and added a few inches to the 5-foot-9-inch model’s frame.

The Dior Beauty ambassador pulled together her casual look with he own gold hoop earrings, tiny black shades with red-tinted lenses and a travel-friendly black carryall. She wore her hair slicked back in a bun.

Hadid is back in New York following Milan Fashion Week Men’s. At Fashion Week, the A-lister walked in Versace’s runway show alongside older sister Gigi as well as Irina Shayk. At Versace’s show, she wore a sparkly black sequined suit with power pumps.

When she’s not working, the “it” girl tends to select casual footwear from brands like Nike, Ugg and Dr. Martens. On the red carpet, she prefers high heels, favoring stilettos from brands like Christian Louboutin and Gianvito Rossi.

Flip through the gallery to see how Bella Hadid’s street style has evolved over the years.