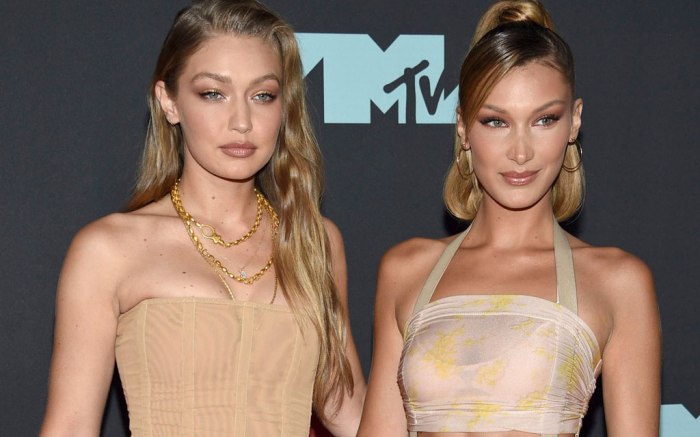 Gigi and Bella Hadid may not be twins, but they coordinated their outfits to perfection tonight at the MTV Video Music Awards in Newark, N.J. The sisters sported neutral ensembles down to the shoes — with Gigi choosing pumps and Bella opting for sandals.

Gigi, 24, hit the red carpet in a nude top teamed with shiny pants in almost the same shade. For footwear, the Reebok ambassador went with Tom Ford’s pointy-toed gold pumps with a stiletto heel and a buckled accent strap. She pulled together her look with gold jewelry.

Meanwhile, Bella wore an unusual blush dress with a yellow floral print and a cut-out detail at the midriff. The model’s shoes were nude sandals set on a stiletto heel, with a criss-cross strap made of PVC. Like Gigi, Bella selected gold jewels to complete her ensemble.

Both supermodels’ outfits adhered to the beige trend that is having a moment this summer. The neutral trend offers a more serene, minimalist feel in counterpart to neon, another of the latest trends.

The sisters joined other stars like Halsey, Hailee Steinfeld and Taylor Swift on the red carpet at this evening’s awards. The VMAs are being hosted this year by comedian and actor Sebastian Maniscalco. Swift and Ariana Grande lead the nominations field with 10 apiece.

In the video below, go behind the scenes with Bella Hadid at her FN cover shoot.