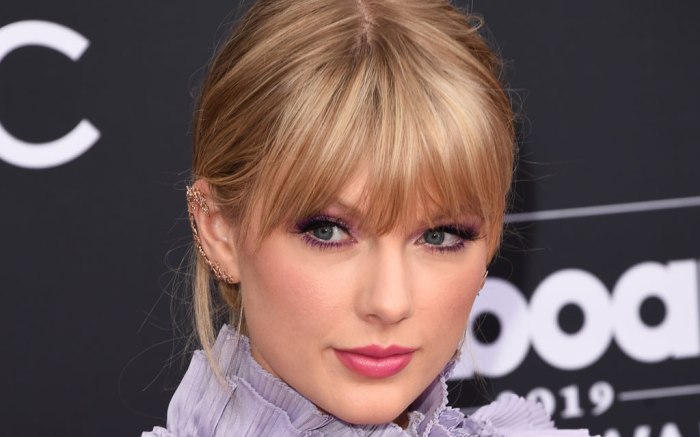 Taylor Swift looked stunning in a lilac minidress as she arrived at the Billboard Music Awards in Las Vegas tonight.

Showing off the girlier style she’s been embodying lately, the pop princess stepped out in a long-sleeved, ruffled Raisa & Vanessa minidress and silver Casadei sandals with a soaring stiletto heel.

On the men’s end, Kane Brown stepped out in a camo bomber jacket over black pants and a button-down shirt. The country star wore white high-top sneakers on his feet and was joined by wife, Katelyn.

Swift is performing her new single “Me!” with Brendon Urie, while BTS will sing “Boy With Luv” alongside Halsey.

Kelly Clarkson is returning to the show as host for the second year in a row and will also perform at the show. More celebrities, including Cardi B, Ariana Grande and Lady Gaga, are expected to make their way out onto the red carpet tonight.

In terms of nominations, Cardi B leads the pack with 21. Drake and Post Malone tie for second with 17 nods a piece.

Click through the gallery for more celebrity arrivals on the red carpet.

Watch the video below to see celebrities at the FNAAs.