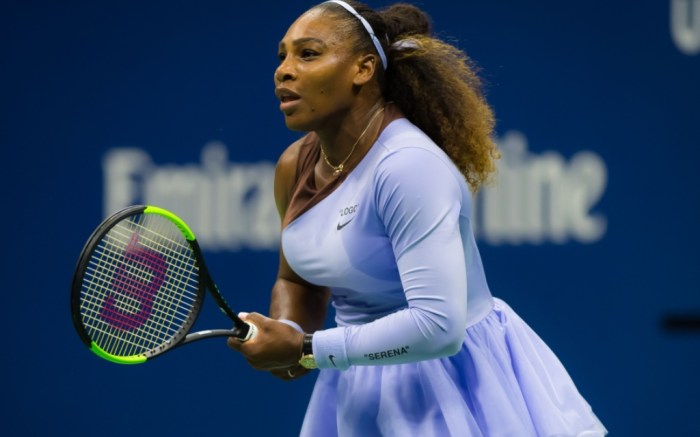 Serena Williams is back at the Australian Open in Melbourne, two years after defeating sister Venus to win her seventh Australian Open title while in the early stages of her pregnancy. Now she’s returning to the court for the first time since giving birth to her daughter, Alexis Olympia Ohanian Jr.

During a practice session on Sunday, Williams showed off a simple look featuring a pale blue Nike top paired with black leggings and black and red Nike sneakers with green soles. She topped things off with a black Nike visor to shield her eyes from the sunny Aussie skies.

Williams’ has always worn the best shoes on the courts. At the 2017 Australian Open, the athlete rocked a bold black and white patterned Nike dress with black NikeCourt Flare shoes.

The tennis star made waves this summer when she stepped out for the U.S. Open in an icy purple Off-White x Nike “Serena” one-shoulder tutu and matching shoes.

This came after the French Open banned the 23-time Grand Slam champ from wearing her Nike catsuit.

For more of Serena Williams’ incredible on-court style, check out the gallery.