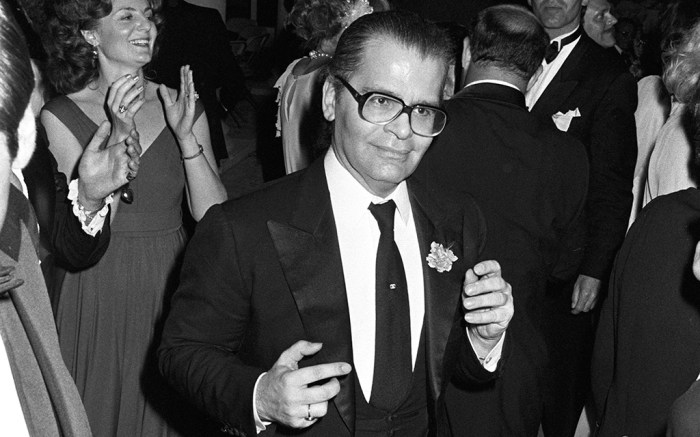 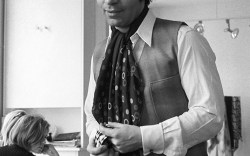 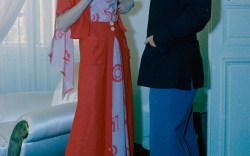 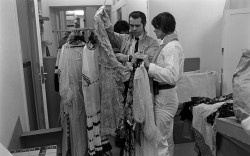 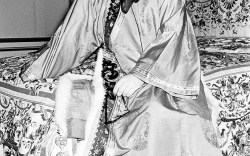 While Karl Lagerfeld worked tirelessly behind the scenes on his captivating designs, he could also work a room like no other.

Here, Neiman Marcus’ SVP and fashion director, Ken Downing, remembers the “rock star,” who drew hundreds of fans during his personal appearances and joined forces with the retailer on some of its most memorable projects.

How Lagerfeld made a huge splash at Neiman Marcus’ Beverly Hills, Calif., store in the 1990s:

“I first met Karl Lagerfeld in 1992, shortly after joining Neiman Marcus in Beverly Hills. Karl had recently illustrated the Hans Christian Anderson children’s fairy tale “The Emperor’s New Clothes.” Karl was planned to make a personal appearance in late November, signing the book in the Beverly Hills store. Upon receiving an early copy of the book, filled with his lush and lavish illustrations, we wanted to make it beyond memorable. I had the idea that Karl would design the Neiman Marcus Christmas windows for the Beverly Hills store, with his illustrations coming to life in the windows and store interiors.

“Working with Karl and his team — with one over-the-top idea after another — it was decided we would also host a Karl Lagerfeld Collection [a big business in the Beverly Hills store at the time] fashion show, complete with Naomi Campbell opening and closing the show. Karl created gowns, a capsule men’s collection and coordinating wigs in the 18th-century style of his “Emperor’s New Clothes” illustrations. It was a moment like no other.

“Karl was exacting, brilliant, involved and kind. An absolute perfectionist, no detail went unnoticed. The following day, Karl signed hundreds hundreds of books for the many fans who came to meet him. The lines snaked throughout the store, and Karl didn’t stop signing until the last customer was taken care of. His dedication was beyond impressive.”

“In 2014, when Karl Lagerfeld brought Chanel to Dallas, Texas, for the Paris/Dallas collection, then-Neiman Marcus CEO Karen Katz and Vogue’s Anna Wintour hosted a VIP lunch honoring Karl. Prior to the luncheon, Karen presented Karl with the Neiman Marcus Award for Distinguished Service in the Field of Fashion.

“Karl Lagerfeld is the only designer to have received the award twice — the first time in 1980 for his work at Chloe and again in 2014 for his work at the house of Chanel. Hundreds of Dallas [fans] came out to see this larger-than-life creative genius that has shaped our ideas of style for decades. Always gracious, a man of true integrity, he moved through the crowd meeting the throngs of fans like the rock star he was and will always be.”

See more images of Karl Lagerfeld through the years.

Karl Lagerfeld’s Own Thoughts on Design, Shoes and His Lucky Life