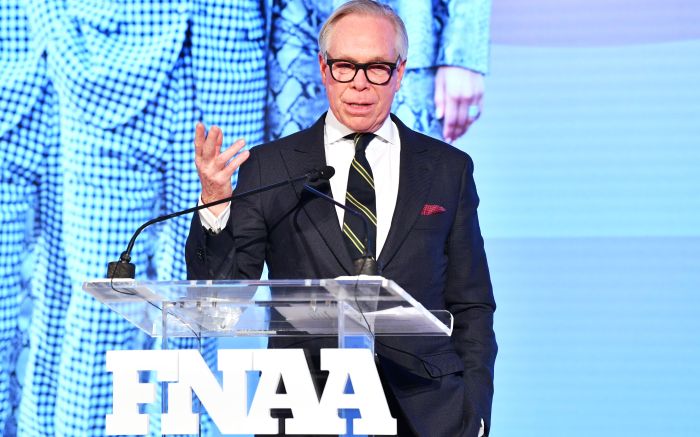 Tommy Hilfiger is a recognized name — both for the designer himself and his brand. But 50 years ago, he was a young man hoping to prove his father wrong.

“Fifty years ago this week, I opened my first jeans shop selling bell bottom jeans and cool rock star clothes,” Hilfiger said Tuesday night at the 2019 FN Achievement Awards at New York’s IAC Building, where he received the Collaborator of the Year award. “When I told my father I was going to build a brand, he said ‘You’ll never make it.’ So I decided I was going to work hard and build a brand.”

And build a brand he did. Hilfiger’s eponymous label, known worldwide, was purchased by PVH Corp. in 2010 for $3 billion.

“I started handing clothes out to various musicians I liked,” Hilfiger said of his early days, recalling when hip-hop stars like Puff Daddy and Snoop Dogg wore his label.

The designer has recently struck fashion gold through collaborations with “Euphoria” star Zendaya and Formula 1 driver Lewis Hamilton, but he joked he’s got his eye on FN’s Style Influencer of the Year, J. Balvin, for his next collab.

How Tommy Hilfiger Has Struck Fashion Gold Through Buzzy Collabs