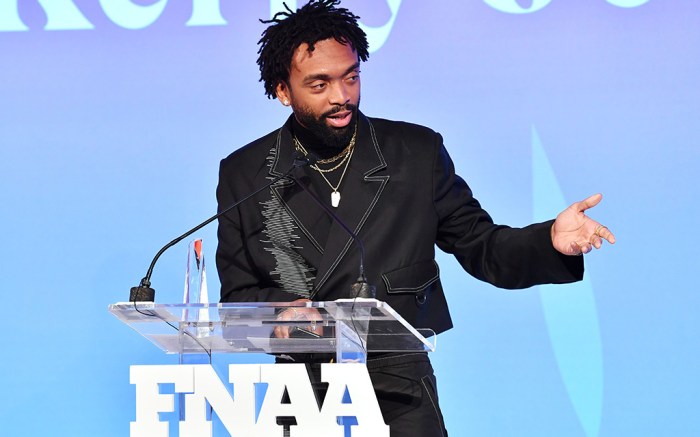 Kerby Jean-Raymond has come a long way, and the founder of the celebrated Pyer Moss brand recalled his accomplishments at the 2019 FN Achievement Awards, where he was honored as the Person of the Year.

In a heartfelt speech, Jean-Raymond reflected on his journey in the fashion world so far. “At the beginning of this decade I was in a very different place,” he said, recalling that at the time he worked for AT&T, was miserable and feeling unsure of his decision to become a fashion designer — a career choice his family didn’t wholeheartedly embrace.

But through all the setbacks, the designer said he stuck to his guns, and the past year has been the culmination of those of efforts.

Although, he admitted, it has been full of ups and downs. “This year I experienced my first spiritual awakening and had my first public panic attack,” said the designer. “And we created over 25 jobs, mainly in the last three months.”

As he graciously acknowledged his many friends, colleagues and collaborators, Jean-Raymond added, “True suffering is waiting for a thank you. So I will instead say thank you to all the people for making this year what it was, actually I should say ‘this decade.’ ”

Click through the gallery to see more from the 2019 Footwear News Achievement Awards.

The Most Memorable Quotes From the FNAAs