Dr. Martens CEO Dedicates Shoe of the Year Award to the Brand’s Fans 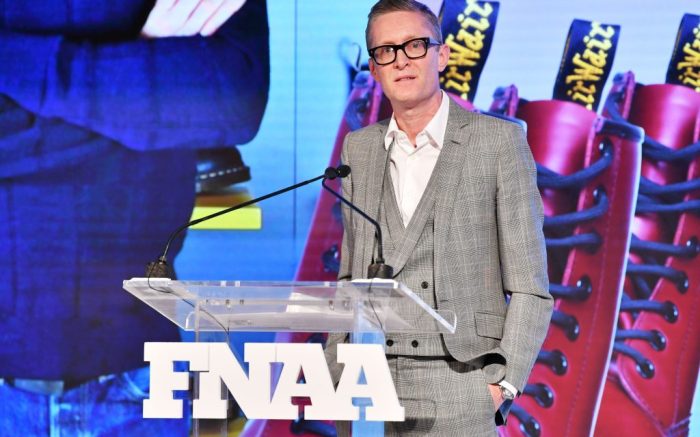 Dr. Martens took home the Shoe of the Year honor for its 1460 boot at the 2019 FN Achievement Awards last night in New York — and CEO Kenny Wilson dedicated the award to the brand’s loyal consumers.

“The people I want to thank more than anyone are the people who went out there and bought a pair, their first pair, of Dr. Martens boots. You make us the brand we are,” Wilson said in his acceptance speech in front of a star-studded crowd at the IAC Building in New York. “We are the alternative, and we’re really proud to win this award.”

The award was presented by Swedish pop star Tove Lo, who told the audience she purchased her very first pair of Dr. Martens as a teenager — “around the time I dyed my hair black [and] got my first tattoo.”

Lo also attested to the durability of the British boot maker’s product, explaining she wore them on her first songwriting trip seven years later in London.

“I was squeezing in an elevator with a bunch of strangers all trying to get to the Heathrow Express. And this rock ‘n’ roll dude who looked like he’d lived about 10 lives looks at my feet and goes ‘Are those Dr. Martens?’ And he points at his own feet and he’s got on the very same shoes,” Lo said.

The Dr. Martens 1460 turns 60 in April 2020 and has long been a symbol of rebellion, favored by British punks in the ‘60s and ‘70s and by members of Seattle grunge bands like Nirvana and Soundgarden in the ‘90s. Today, the brand is enjoying a wave of popularity among “It” girls like Kendall Jenner, Bella and Gigi Hadid and Hailey Baldwin.

Click through the gallery to see all the arrivals at the 2019 FNAAs.

J Balvin Shares the Inspiration Behind His Adventurous Style