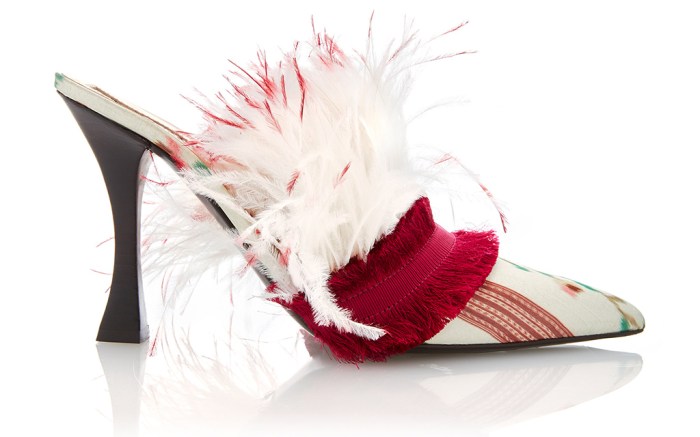 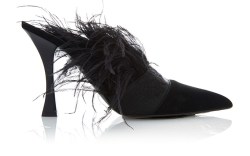 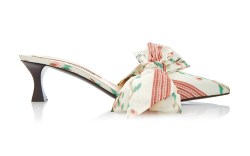 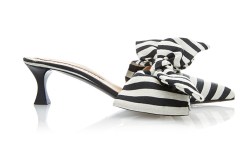 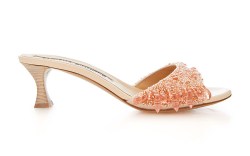 But at least one female designer got a bite of the collaborative action, too, as Tabitha Simmons conceived a line of charming footwear for Brock Collection centered around “raw American romance,” as explained by Simmons.

“I have always been a big fan of Brock collection personally; I wear a lot of their things. It seemed very natural to come together professionally as both of our brands have a very feminine aesthetic,” the designer told FN.

“When we started the design process we aligned on our love of print and texture,” she continued.

The shoes are as fashionable as they are commercial, with both neutral and colorful mule options — one of the hottest footwear silhouettes of the last few seasons — as well as several boot options just in time for fall. And the styles are timely, indeed, officially becoming available on Moda Operandi’s e-commerce site yesterday afternoon.

A pair of kitten heel slides sets the opening price point at $625 while the lace-up thigh-highs are on the highest end at a price of $1,595.

“I think that the bow mules will be a best seller as they feel so fresh,” Simmons said. “I love the mules with the feathers as they are so romantic. I also love the lace-up bootie — I have such a soft spot for a lace-up bootie as I wear them come rain or shine.”

The partnership comes closely on the heels of Simmons’ work with Johanna Ortiz. For resort 2019, the British designer worked with Ortiz on shoes grounded in exotic floral prints, and it was the second installment of footwear between the two. In addition, and while not a unique collaboration, Rebecca de Ravenel styled her spring 2019 collection at NYFW with an assortment of Simmons’ sandals.

To browse and shop more of the Tabitha Simmons for Brock Collection shoes, click through the gallery of styles.

Why Tabitha Simmons is the Wonder Woman of Fashion Week