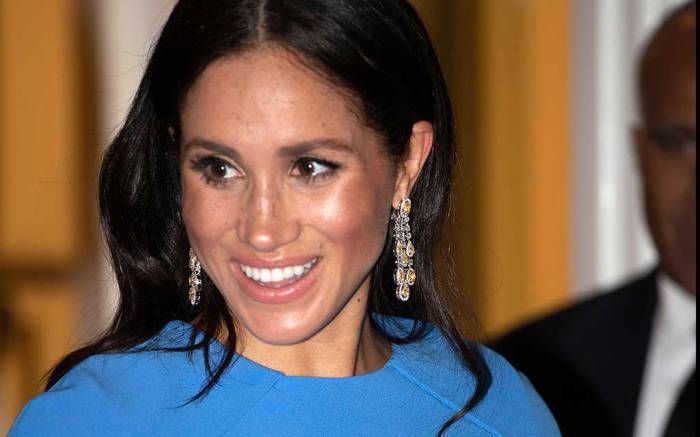 Meghan Markle’s first official royal tour is over. The Duchess of Sussex accompanied Prince Harry to Australia, Fiji, Tonga and New Zealand for their 16-day trip, and while it was filled with momentous events and appearances, Markle’s fashion truly stole the show.

The former “Suits” actress wore more than 40 outfits during the course of her travels. Many looks were truly meant for a princess — including her custom Givenchy pleated dress and that gorgeous fall ’18 Oscar de la Renta tulle gown she wore to the Australian Geographic Society Gala Awards.

However, despite having access to the biggest designers in fashion, many of her Australian tour ensembles were priced fairly reasonably and surprisingly accessible for us commoners. And it was her shoes that made her style so attainable.

Footwear brands Markle sported included J. Crew, Rothy’s, Adidas, Veja and Banana Republic — all of which can easily be purchased online and in stores.

To get a gist of how much Markle typically spends on her public attire, check out the cost breakdown of her some of her most popular outfits below.

Markle’s Veronica Beard shirtdress cost $595 while her on-sale Banana Republic shoes were less than $100, retailing for $65. She wore the affordable footwear to the unveiling of The Queen’s Commonwealth Canopy at Tupou College on Oct. 26.

On Oct. 24, Markle and Prince Harry visited the University of the South Pacific in Fiji. There, she wore a $1,495 dress by Figue and $120 Castañer wedges. She also wore the espadrilles once more during her trip.

Markle showed off a lot of leg with her high-slit striped dress during her tour of Fraser Island on Oct. 22. Her eco-friendly Reformation dress retails for $218 and her Sarah Flint sandals cost $245.

In Fiji, Markle dressed more formally for the state dinner. She chose a Safiyaa cape gown for $1,405 and $625 Manolo Blahnik pumps. But her heels were worth the investment: Markle recycled the Manolos a grand total of seven times during the royal tour.

Markle’s Martin Grant coat proved to be useful during her trip. She sported the $1,690 trench on more than one occasion. At the welcome ceremony in Sydney on Oct. 16, she opted for a $1,800 dress by Karen Gee and $375 Stuart Weitzman Legend pumps.

The Duchess of Sussex supported her friend and now designer Serena Williams by wearing a $145 blazer from her namesake label on Oct. 17. Markle completed the ensemble with a $219 white Maison Kitsune blouse, $235 Outland Denim jeans and $178 J. Crew boots, which are sold out.

To see more of Markle’s outfits from the Australian tour, click through the gallery.