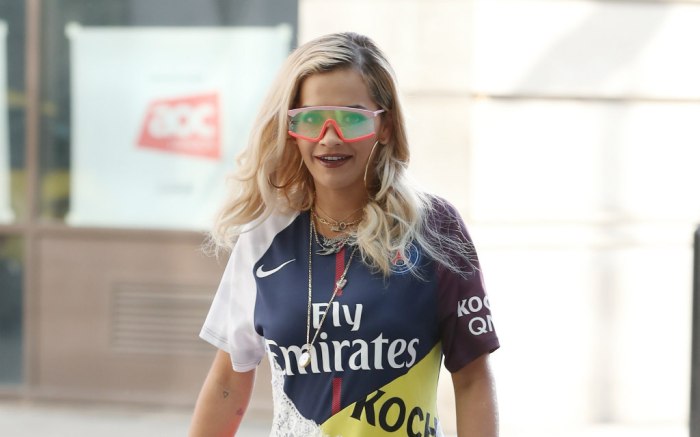 Rita Ora put her vocal talents to work in a new way this morning, helping her good friend, DJ Nick Grimshaw cohost his final BBC Radio One breakfast show before he moves to his new afternoon slot.

The 27-year-old British singer wore an eye-catching outfit for the occasion. Ora was spotted arriving at the Radio One studio in central London, dressed in a colorful Paris Saint-Germain soccer jersey dress by French fashion label Koché. Her unusual look featured lace accents and an asymmetric hemline.

She accessorized with Manolo Blahnik’s chic Scolto open-toe sandals, detailed with two clear PVC straps over the instep and perched on a nude-colored 3.5-inch stiletto heel. The shoes are available from high-end retailers such as Bergdorf Goodman and Barneys New York for $695.

Ora also loaded up on jewelry, including a collection of gold bangles and several necklaces and rings. She completed the look with a pair of ski-style shades with two-tone pink rims.

But apparently Ora forgot one important detail: underwear. Grimshaw teased his friend about the missing garment in an Instagram post, writing, “Late and knicker-less for my final Monday morning show. What a woman.” He shared a photo of the two hanging out together on set.

Following her cohosting gig with Grimshaw, Ora travels to the south of France tomorrow and then on to Monte Carlo, where she’s set to perform at Salle des Étoiles.

She will return to England on Saturday for a show at the historic Ascot Racecourse. Her other summer tour stops include Malta, Bulgaria and a string of UK cities, among them Manchester, Maidstone, Northampton and Chelmsford.