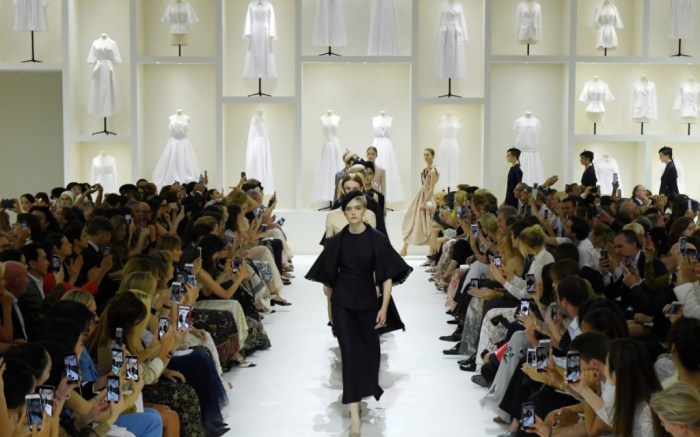 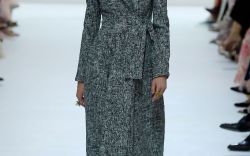 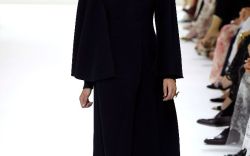 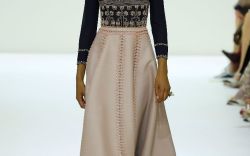 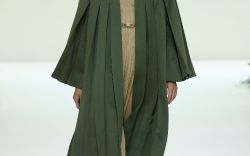 The “Christian Dior: Couturier of Dreams” retrospective, which opened last year at Paris’ Musée des Arts Décoratifs, attracted some 708,000 visitors during its six-month run. Today in Paris, the house re-created its most stunning display to backdrop its fall ’18 couture show.

Just like the installation at the exhibition, which evoked the house’s couture ateliers, attendees including Kate Bosworth, Karlie Kloss, Katie Holmes, Natalia Vodianova and Olivia Palermo were entranced by the rows of 294 pristine white dressmaking mannequins that stretched floor to ceiling.

The mannequins were all dressed in real toiles, hand-sewn at the Christian Dior ateliers. Toiles are skeleton garments conceived in calico so they can be tweaked before being created in the final fabric. However, in a novel twist, some of them were actually the toiles from the new collection that walked the runway.

This notion of the skeleton, or underpinning of a collection, was also reflected in Maria Grazia Chiuri’s footwear. Simple taupe-colored pumps came with low, comma-shaped heels. Done in an amber Perspex, they evoked actual bones. When the creative director joined the house in 2016, she reinterpreted the comma heel, created by Rogier Vivier when he worked at Dior in the 1950s.

The staging celebrated the work of the house’s petits mains but also served to highlight the next stop for the “Couturier of Dreams” exhibition. Hot off the press, London’s Victoria & Albert Museum will stage an adaption of the show launching February 2019.