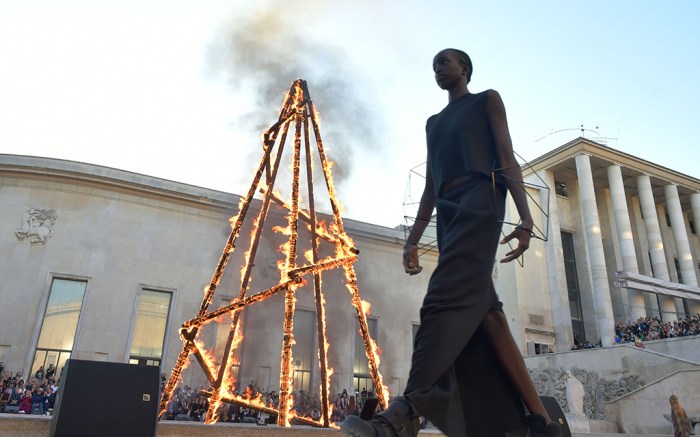 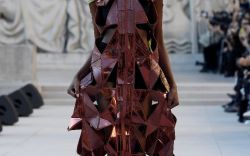 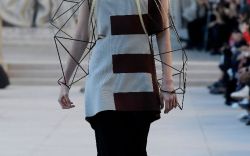 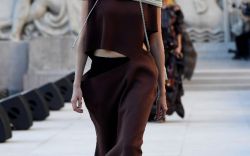 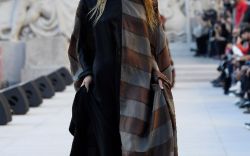 The designer constructed a giant installation bang in the middle of the Palais du Tokyo. It was part pyre, part tower of Babel after the name of the collection, a reference to the Biblical tower said to have caused the world’s linguistic problems.

Models dressed in festival-inspired gear given the prerequisite Rick Owens treatment — think geometric body armor, deconstructed jackets that morphed into fanny packs and sculptural jewelry pieces mirroring the silhouette of said pyre — marched around it, shod in Velcro-fastened desert boots and sandals both done in collaboration with Birkenstock.

Their blazing torches were a dead giveaway as to what was coming next, and the wooden installation was soon lit up like a Christmas tree. The audience put the black fans and visors thoughtfully placed on the benches to good use against the smoke and the heat issuing from the furnace before them. The miniature bottles of Mezcal were probable ill-advised. But still.

However, one could also not help but think of the news broken this year that Burberry incinerated some $37 million worth of its products to prevent the brand from becoming devalued. Was Owens having a pop?

The idea behind Burning Man is one of creativity, community, anticonsumerism, inclusion and, more importantly, leaving no trace, all of which lie at the core of Owens’ ethos but some of which don’t sit particularly with the current state of the fashion industry. But tonight, change was in the air — along with a lingering odor of wood smoke.