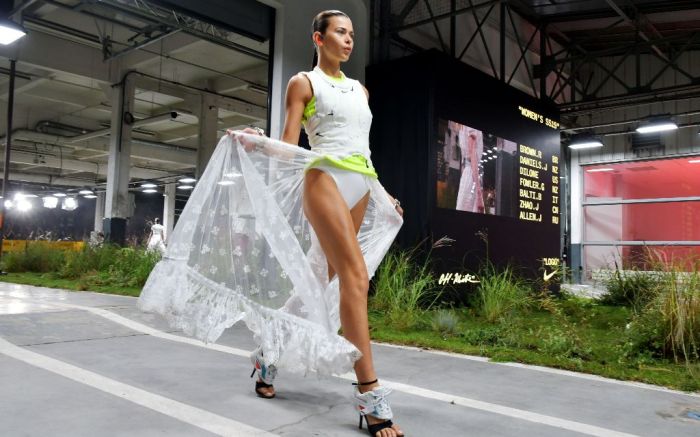 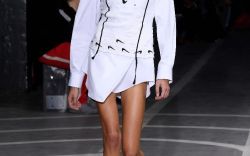 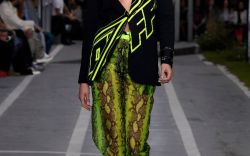 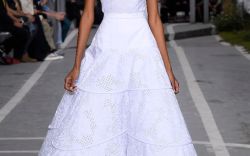 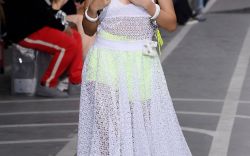 “I used sport as a metaphor for life,” Abloh told FN backstage after the show. “It’s a form of entertainment, but people dedicate their lives to it, and I thought it was a good backdrop to tell the story of modern women.”

The theme may have been running, but much of the collection seemed perfectly suited to a Nike athlete of another sport: Serena Williams. The combination of tulle gowns, spandex Swooshes and souped-up athletic shoes called to mind the outfits that Abloh created for the tennis star last month for the U.S. Open.

While the designer did not explicitly reference Williams in the show, he’s recently made his admiration for her known. “Willing to design dresses for her for life,” Abloh wrote in an Instagram post of Williams during the tennis tournament in August, in which she wore a series of his tutu-dressed leotards. The frilly ensembles were a response to the French Tennis Federation president Bernard Giudicelli’s ban on the black catsuit that Williams wore to the French Open.

Abloh had catsuits, too, and in spring ’19’s neon supertrend to boot. The designer sent out Kendall Jenner and Bella Hadid in tandem to open the show, wearing coordinating white shirts tucked into miniskirts with strappy white heels, followed by Kaia Gerber in a white minidress decked out with Nike logos.

The collection proceeded into looks that balanced the athletic with the super feminine, pairing bodysuits with lace skirts, performance T-shirts with tulle and a few “Runaway Bride” wedding gown-and-sneaker combos.

On-foot, Abloh showed a few Nike styles, including a neon track sneaker with oversized treads, plus high-heeled sandals with ankle details resembling the upper part of a sneaker with the bottom cut off.

The collection was heavy on Nike logos, and it appeared that a good amount of the ready-to-wear collection was supplemented with performance pieces from the athletic brand. Whether that was intentional or a need arising from Abloh’s busy schedule balancing his Off-White work with his other day job as artistic director of menswear for Louis Vuitton (plus the myriad side projects he has going on) is unclear. But the Swooshes brought the collection closer to the elusive sweet spot of athleisure and “real” clothing, with a big dose of feminine fantasy thrown in for good measure.