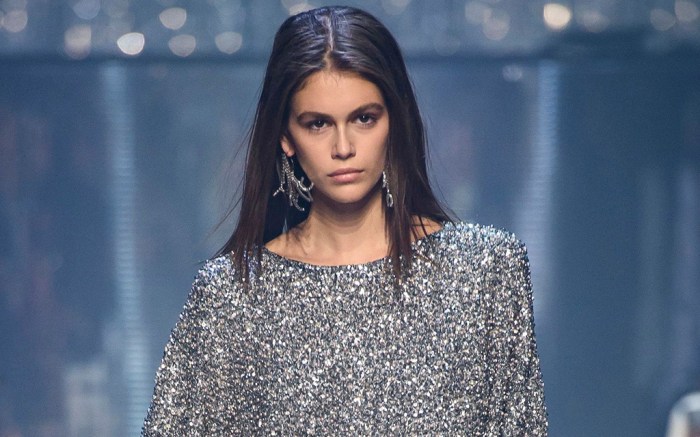 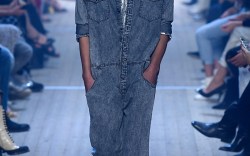 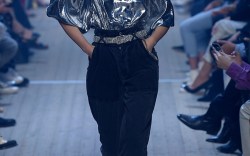 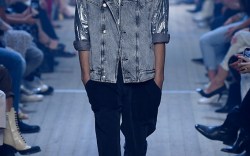 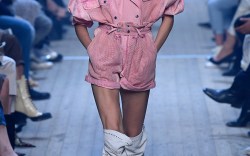 Like it or not, the ’80s — one of fashion’s most polarizing eras — is back with a vengeance. The trend has slyly creeped its way back into the mainstream, with power dressing making a sizable impression at the fall ’18 shows as designers like Alexander Wang, Gareth Pugh and Altuzarra served up oversized blazers, pinstripe suits and pumps with pantyhose to help usher in the resurgence. Isabel Marant was also on board and has only continued to push the memo further for spring ’19 with her ultraglam ’80s extravaganza at Paris Fashion Week last night.

A band of metallic-clad dresses and jumpsuits were underscored by Marant’s key shoe message of slouch boots. The oversized footwear was a seamless transition from the baggy pants and voluminous tops interweaved throughout. Kaia Gerber modeled one of the key looks, featuring a lustrous silver frock paired with white knee-highs.

There were other iterations of the loosely fit boots as well, including denim, black and a sprinkle of dusty lavender. The only other footwear option? A sleek metallic sandal which cast a heavy contrast against bulky denim jackets and high-waisted trousers.

Marant was joined this season by a score of other brands inspired by the ’80s, including Aquazzura, Attico and Jimmy Choo. Attico’s Gilda Ambrosio and Giorgia Tordini specifically referenced Palm Beach, Fla., featuring the design duo’s standout heel, a sky-high metallic platform. Meanwhile, Proenza Schouler’s acid-washed denim and leather ankle-ties around its boots took hold of the casual end of the trend.

Claire Foy Isn’t the Only One Making These Mismatched $1,400 Heels a Red Carpet Staple