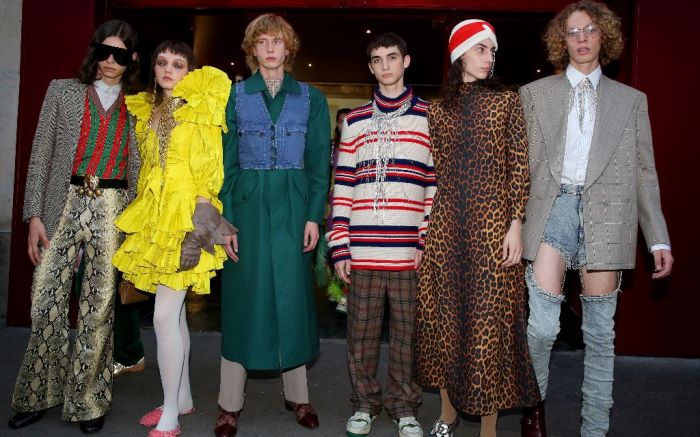 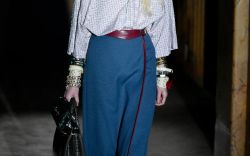 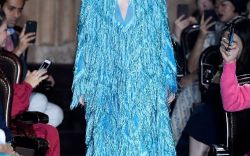 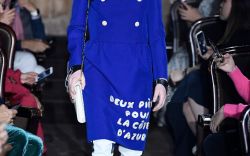 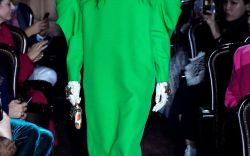 For anyone doubting that spring 2019 will be full of neons and other bright colors, Gucci just confirmed it.

The Italian fashion house held its spring ’19 runway show on Monday, the first day of Paris Fashion Week, opting to show in the French city instead of during its usual time slot at Milan Fashion Week.

Held at the city’s Théâtre Le Palace, a former nightclub known for its rule breaking in the 1970s and 1980s, the show began with a dark surrealist film, followed by models walking down the aisle ways of the theater two-by-two as opera music played. Once half of the models had assembled on the stage, French actress Jane Birkin appeared in the audience to sing a rendition of her 1983 song “Baby Alone in Babylone.”

As for the collection, Gucci creative director Alessandro Michele confirmed other trends during the show. Among them, details like puffed shoulders, checked tailoring, diamanté accents, skirt suits, feathers, python print and leopard print — all strong fall ’18 trends the brand is majorly responsible for — were reinforced. Many of the ready-to-wear looks also had a louche boudoir vibe without showing actual pajamas, and a new eyewear style resembled a sleeping mask.

For footwear, Michele kept things relatively straightforward — for Gucci, at least. The majority of the models wore a white sneaker with green accents that gave off a tennis vibe in its color scheme and shape. The shoe was decorated with large round crystals at the laces and had a green stripe on the side, keeping with the brand’s signature low-tops and hiking-inspired sneakers from fall ’18. There were also more exaggerated athletic shoes, like a pair of white men’s sneakers outfitted with large rubber toe caps (in red and green) a là Ronald McDonald.

There were more ornate women’s shoes, such as a pair of bubblegum pink slippers done in ruffled velvet, an ice blue metallic pair of heeled loafers with giant “G” logos on the front and a red leather knee boot that is sure to be a standout for the season.

See more styles on the runway at Gucci’s spring ’19 show.