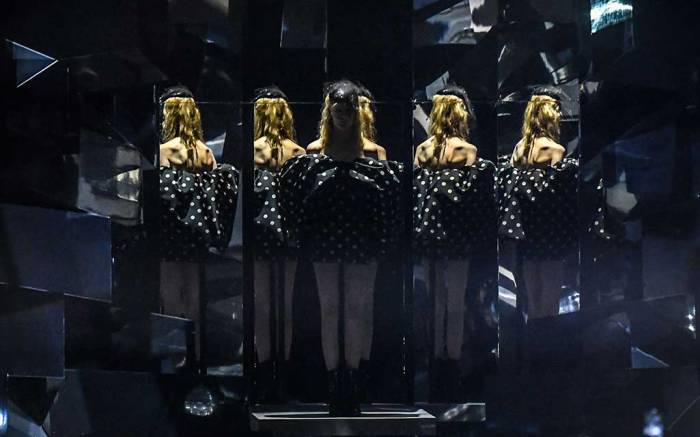 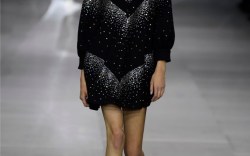 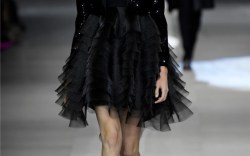 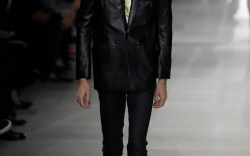 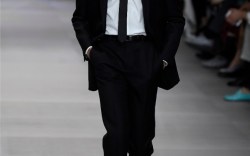 Tonight in Paris, flanked by a drum roll from France’s Republican Guard, a wall of revolving mirrors parted to reveal the first look in Hedi Slimane’s Celine debut, a polka dot mindress cut to resemble a giant bow.

The set, also created by Slimane, was designed to invoke the mirror-paneled interior of a child’s music box complete with its wind-up ballerina.

And if you’re wondering how little girls in poufy frocks and soldiers, toy or otherwise, could possibly relate to your beloved Celine, let us fill you in. The label actually started life as a luxury children’s shoe label. Make sense now? Exactly.

But here’s the twist. Once he’d set it up, Slimane set out to unpick this notion of gender stereotypes. And while the 96 looks alternated between women’s and the label’s much-anticipated men’s debut, it turns out that all the looks worn by the show’s male contingent were actually unisex.

So again, if you started out wondering where, amidst the all sequins, lamé, pouf dresses and mini-crinos, the Celine woman will turn for daywear, you’ll find it in the sharp shoulders, skinny pants and skinny ties sported by the show’s male contingent.

Likewise the shoes. The derbies and buckled western boots. All unisex.

However, as well as finding many women eager to embrace the androgynous aesthetic of the men’s, ahem, unisex pieces, they will also appeal to Slimane’s numerous male fans, not least the musician contingent on tonight’s front row. Not least Mark Ronson, Bobby Gillespie of Primal Scream, Carl Barat of The Libertines, Jamie Hince of the Kills and Alex Kabranos of Franz Ferdinand.

Which brings us back to the idea behind the music box. It was also, no doubt, a nod to the scene inhabited by Slimane himself and from which he draws much of his inspiration. He even had French psych-punk rock band La Femme compose the soundtrack for the show.

And while FN only spotted one of the label’s new hero “16” bags on the runway, there were at least two in the venue. The second? With Lady Gaga, of course. Both Gaga and said arm candy were seated front row next to Karl Lagerfeld.

Since the show ended, there’s admittedly been much comparison to Saint Laurent. One anonymous buyer told FN they felt as if there were now two Saint Laurents, which left them wondering just how to apportion their budget. But here’s the thing. Slimane and Saint Laurent are still somewhat synonymous. A designer like Slimane has such a strong aesthetic that he’s going to dispense it, wherever he hangs his (Bibi) hat.

Phoebe Philo and Celine may be still synonymous right now, but don’t forget that there was a time when Philo and Chloe’s boho aesthetic were synonymous as well. You mean you’ve forgotten already. Exactly.

See more styles on the runway at Celine’s spring ’19 show.