Nicholas Kirkwood’s Runway Debut Was Out of This World 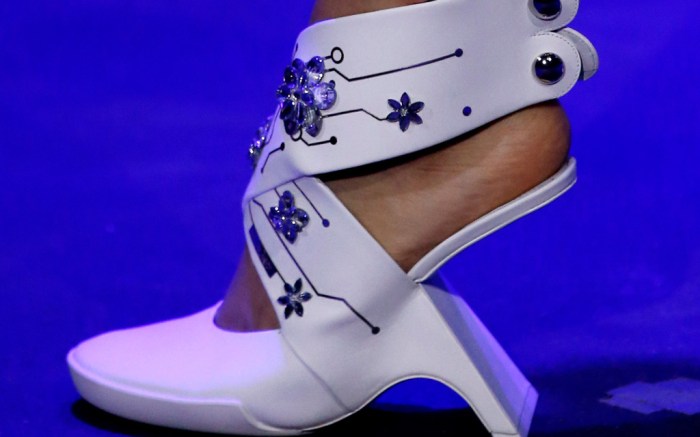 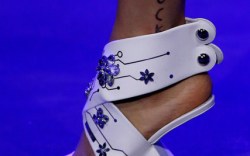 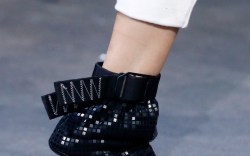 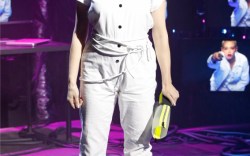 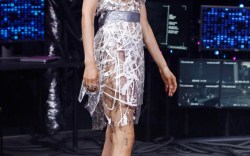 In an exclusive interview with FN last week, Nicholas Kirkwood said he would use his first London Fashion Week show as a “platform for creativity.” And he was as good as his word: Today’s presentation was truly out of this world.

Opened by Kirkwood’s spring ’19 campaign star, #MeToo movement, leader, Rose McGowan, the production was set in a futuristic police state governed by the “Bureau of Conformity.” The staging was an imagined hackers’ HQ backdropped by a wall of TV screens fizzing with static.

In keeping with the dystopian vibe, utilitarian and DIY motifs dominated. Wedges with floating heels came wrapped in repurposed computer cables, while the heels of ankle boots were fashioned from off-key cubes and hexagons recalling bolts. Sock boots were swathed in duct tape, and the piece de resistance was an electricity print done in ultraviolet that lit up in the sea of flash bulbs emanating from the photographers’ pit.

Even the designer’s signature pearl motif got a utility style makeover, appearing on slingbacks as sports-inspired toggles.

While the majority of the shoes were exclusive one-offs, created especially for the show, there were also three see-now, buy-shortly styles in the line, including a combat boot in the spring season’s new floral Perfection Print.

The wider concept, he said, was about taking a stand against retail’s current “play it safe” climate. “My expression of that idea was to make it into an art form, a fantasy,” said Kirkwood. “This is my interpretation of what’s in my head, but I also wanted to make it entertaining.

“If you’re going to show shoes on the runway, you’ve got to think outside the box,” he concluded.