Could Prada’s Sock Sandals and Sculptural Wedges Could Be The Next ‘It’ Shoes of Spring 2019? 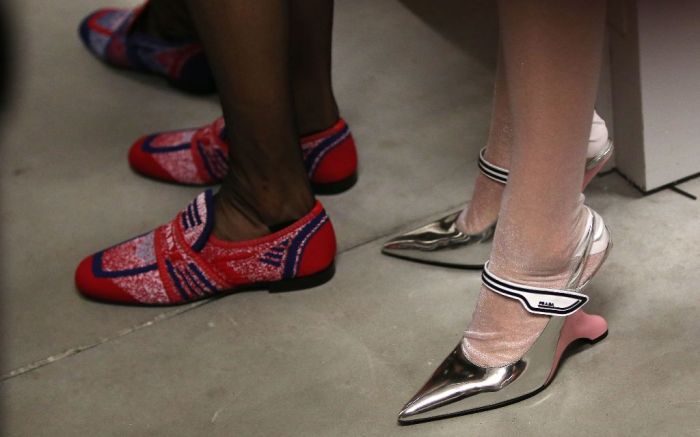 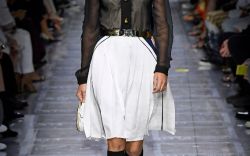 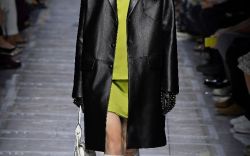 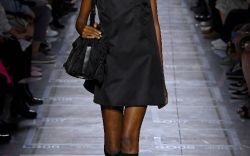 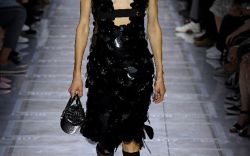 Miuccia Prada is always a mix master, and her spring ’19 show, held at her Fondazione Prada in Milan on Thursday night did not disappoint. The designer has long been known for defying fashion archetypes and her creations often escape attempts to tie them up in a neat box of identifiable trends.

Her spring ’19 collection was equally eclectic. Prada opened the show with a series of sock-accented sandals, in which the two were seamlessly blended into one another, with a cutout on the front of the ankle and an open space for the toes. With their technical knit material and sporty graphics, the shoes almost resembled water socks.

Then came the socks and Mary Janes — but there was more to them than what was visible from the front. Sheer knee socks with Prada logos mixed with a series of Mary Jane-style pumps that had a variety of architecture to their heels.

There were inverted wedges (a signature that Prada has done in past collections, including the hot-rod theme from spring 2012 — which reappeared for fall ’18), done in a plexiglas that seemed to have a more malleable, rubber sneaker-like texture and a corresponding sole that resembled Nike’s VaporMax. And if this season’s Flame heels are any indication, spring’s mixed-media heels are likely to be the next street-style stars come 2019.

The heels came in a variety of colors, as did the uppers, some of which were done in a sporty knit similar to that of the sock sandals.

Aside from the footwear, there were ready-to-wear silhouettes that hinted toward trends that the designer could be responsible for in the near future, namely (the return of) baby doll dresses and the often-maligned bermuda short (whose cousin, the biker short, is having its own moment).

There were also hints of neon — an already full-force spring ’19 trend that Prada was fully responsible for with her fall ’18 collection.