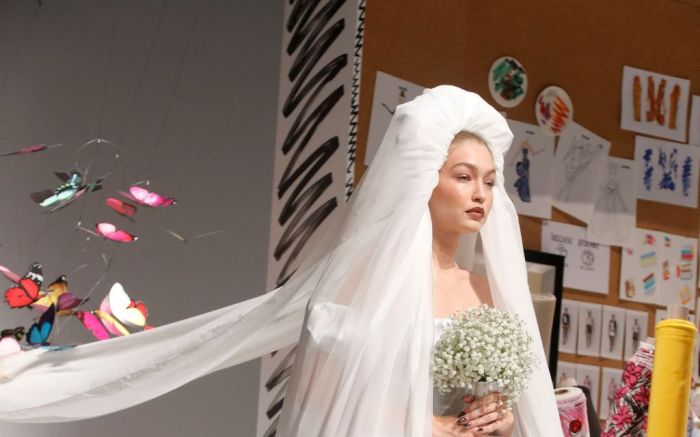 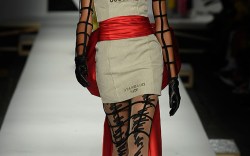 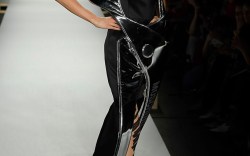 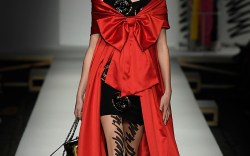 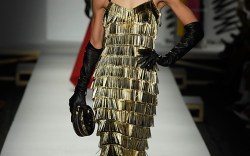 What would Gigi Hadid look like as a bride? Jeremy Scott gave everyone his version of what it could be at his Moschino show on Thursday night in Milan — albeit a makeshift one, as the gown was actually just bedsheet fabric improvised as a frock, capping off a runway that had Scott imagining the entire spring ’19 collection as a last-minute exercise in improvisation in his workshop.

Before the runway lit up, audio played of a make-believe phone call between Scott and Hadid, in which the model asks the designer where his collection is as the show is about the start.

What came out after were ready-to-wear pieces, accessories and footwear that all looked as if they had been scribbled on with markers (and quite literally for the white pumps, which were fresh with Sharpies). Stockings were also scribbled with black marker down the front of the legs. Combined with the ready-to-wear pieces (which veered toward skirt suits) and accessories like logo bags, the effect was similar to a rotoscoping illustration.

The show evolved into less literal (and commercial-friendly) pieces and into dramatic showstoppers that riffed on the idea of a workshop. Looks included a giant pair of scissors as a gown, ruffles done to look like yellow measuring tape and even a gold-embellished dress topped with a giant thimble hat.

See more styles on the runway at Moschino’s spring ’19 show.