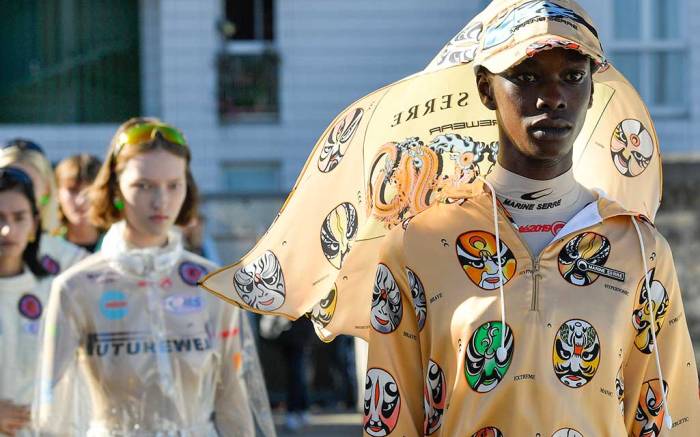 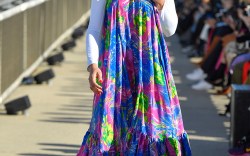 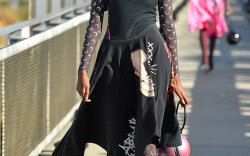 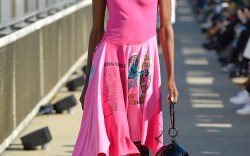 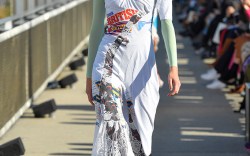 Marine Serre dropped some major hints when we spoke at her Matches Fashion takeover during London Fashion Week this month. However, fashion’s new wunderkind didn’t quite prepare us for the full magnitude of the footwear offering she unveiled today at her Paris Fashion Week show.

Hot on the heels of last season’s shoe collaboration with Nicholas Kirkwood, the LVMH prizewinner not only worked with Nike, Converse and Melissa, she also launched her own in-house footwear. Meet the Moonwear Futureheel. An evolution of her signature half-moon logo hosiery, the sporty little numbers featured a rubber undersole, kitten heel and pointed toe, and came with a repeat or single logo.

Her Nike collab shoe involved a co-branded Air Max Plus in white, while the Melissa look was a babouche slipper in vegan friendly plastic. And Serre’s version of the Converse Chuck Taylor boasted a black-on-nude moon print like the hosiery. Of the Nike, the Belgian-born designer told FN: “We needed sneakers; you cannot do anything without sneakers today.”

Dubbed “Hardcore Couture,” the collection was presented on a footbridge overlooking an urban wilderness of rail tracks, giving us Formula 1 vibes. The majority of the looks, including asymmetric scarf dresses, power suits and scuba suits, came layered over signature printed bodysuits. Even the more outré pieces were functional and easy to wear.

Serre divided her collection into four lines: ready-to-wear, both core (White Line) and more avant guard (Gold Line); upcycled (Green Line) and upcycled couture (Red Line). While this may seem a bit complicated for such a young label, there’s a strong Belgian tradition in this kind of division. And it never did Martin Margiela any harm.

Addressing the couture aspect of her line, Serre explained she does not see couture in the traditional sense. Her definition of the word? “For me, it means time, and it means care.”

Michael Kors and Versace to Join Forces in $2B Deal

This Was Milan Fashion Week’s Biggest Trend for Spring 2019