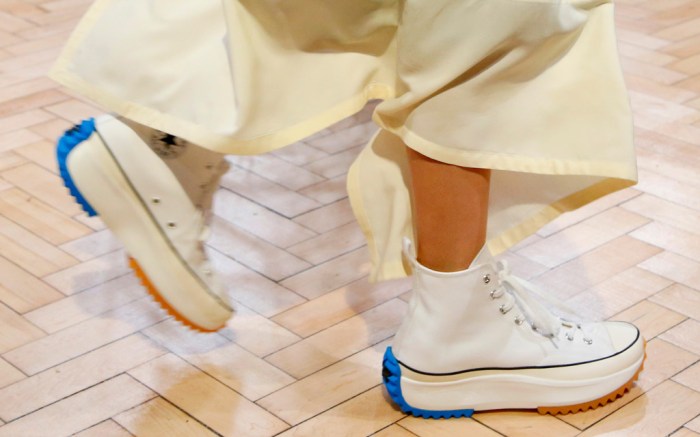 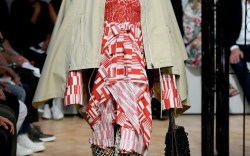 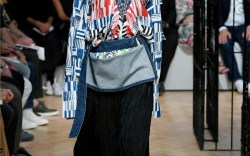 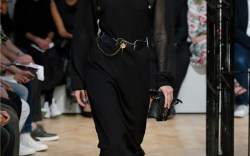 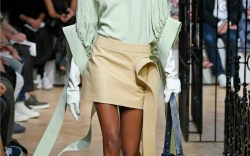 “I wanted a normcore idea,” he said, speaking to FN backstage afterward. “So when you drop the look down, there’s a juxtaposition. It’s the idea of familiarity; when the look is pushed, you can bring the familiarity back with the shoe.”

Sporty sneakers were a strong fit with Anderson’s spring ’19 ready-to-wear collection, which explored the idea of movement.

“Clothing comes to life through the idea of walking. It has to be seen in motion. That is what clothing is about,” he said.

This idea of fluidity pervaded the whole collection, with its fringed, asymmetric shirt-dresses and floating mesh details at the knees and midriffs.

Anderson explained he’d been thinking about female empowerment in fashion: “How do you empower the wearer? I think it is through the idea of fluidity, so [that’s why] I had everything moving off the body.”

This notion of movement extended also to other footwear styles in the line, including a series of hardware-covered boots. “The metal pins on the shoes are doubled,” Anderson said. “So the two lines blur together when you walk and become one.”

The boots came in slick knee lengths or with patent leather ruching. Special mention goes to the two-tone green and red versions — think technicolor pirate, in an exceptionally good way.