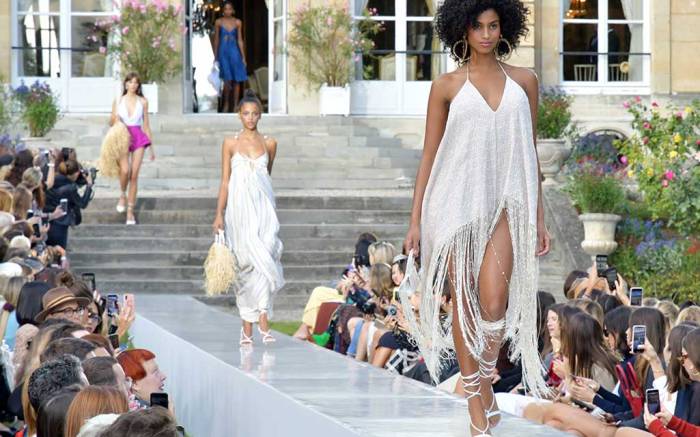 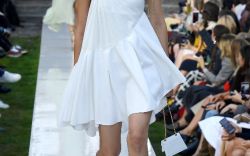 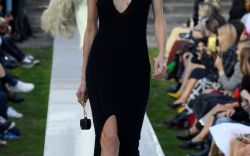 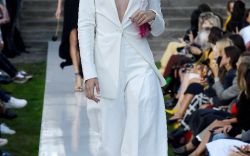 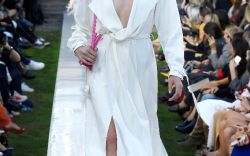 Simon Porte Jacquemus’ spring ’19 show was totally prêt-à-plage. (That’s “beach-ready,” but it sounds way better in French, right?) The designer, who never strays far from his Marseilles roots, presented his Riviera-inspired collection today in Paris at the Italian embassy, his outdoor runway making the most of the last vestiges of summer.

But this was the chicest of beaches, where looks segued from bikinis and voluminous shirt dresses to plunging evening gowns and back. Which is the whole point about the South of France, he said, because you basically commute between the beach and the red carpet.

The designer’s spring heels catered for just such eventualities. His signature mismatched geometrics were realized in colored Plexiglas that glinted in the evening sun. “I wanted to follow on from the abstract heels that made me famous but a bit different way,” he told FN, citing Italianate sculpture and Murano glass vases as inspirations.

However, he also debuted a soaring lace-up platform with architectural wooden sole and straps that passed underneath the heel. “Sure it’s a cliché, but platforms are a must for the South of France in the summer,” he said, “I’ve never done them before, so they’re my new obsession.”

Easier to negotiate the sand than the heels? “I don’t know,” he said, “you should try!” Now there’s an invitation.

But shoes weren’t his only star-turn accessory. Having debuted those micro-size top handle bags for fall, he upped the ante with supersized straw beach bags. “I wanted to continue the idea of the straw, as the hats were everywhere,” he said, referring to this summer’s outsize straw hats, which took Instagram by storm. A most millennial of designers, he certainly knows a piece of Insta-candy when he sees it.

FN’s postshow shoe talk with the designer was interrupted when another journalist cut in complaining that she’d “heard enough about shoes” and wanted to talk about something else. “But I like shoes,” he said.

And although he politely acquiesced, it was under sufferance.