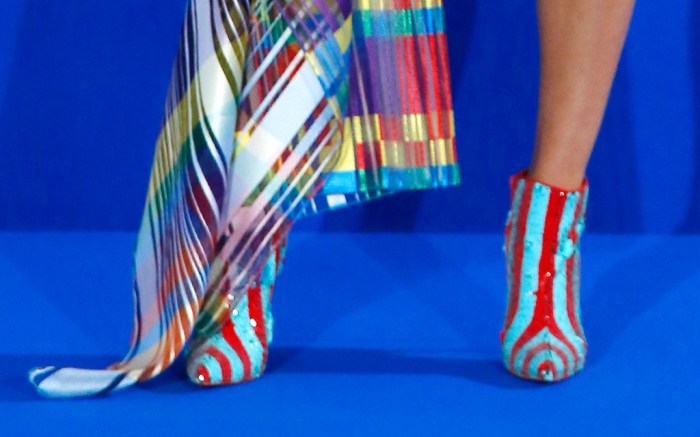 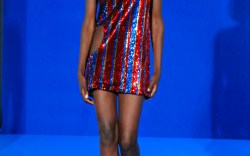 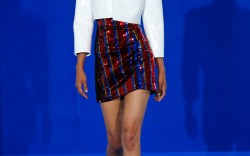 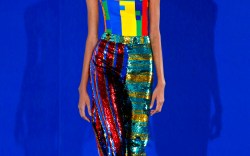 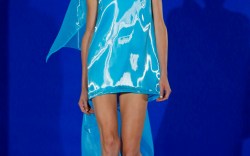 For the Halpern show on Saturday at London Fashion Week, designer Michael Halpern reprised last season’s collaboration with Christian Louboutin and matched the exuberant ’60s motifs of his ready-to-wear to the towering heels.

Turquoise and pink florals, graphic black and white paillettes, a rainforest canopy print in saturated blue and yellow and a multi-hued checkerboard all echoed from the clothing across ankle boots, pumps and sandals. Halpern even gave his signature zebra a primary-colored twist. And many of the fabrics from the clothing found their way to the feet.

Halpern said of working with Chrisitian Louboutin: “They really let us go wild and push the boundaries.” He also explained that the wavy silhouette of the heels came from Louboutin’s archives.

While the designer’s signature paillettes were evident in abundance — including applique on the fishnet stockings — Halpern explored alternatives as well. “The collection was about experimenting with new mediums,” he told FN. “It was amazing to express that magpie effect in ottoman embroidery, denim and even chiffon.”

The Halpern woman is traditionally a ’70s disco diva and denizen of Studio 64. However, for the spring collection, the designer adopted a ’60s theme inspired by his maternal grandmother, a working woman from the Bronx. He said he was thinking about the predecessor of his mainstay muse — the type of woman who paved the way for the women’s rights movement of the 1970s, with its rising hemlines and the advent of the pill.

And thanks to a collaboration with Topshop launching in November, a younger generation of post millennials can also get a taste of that Michael Halpern magic for a fraction of the price.

Click through the gallery to see Halpern’s full spring ’19 collection.