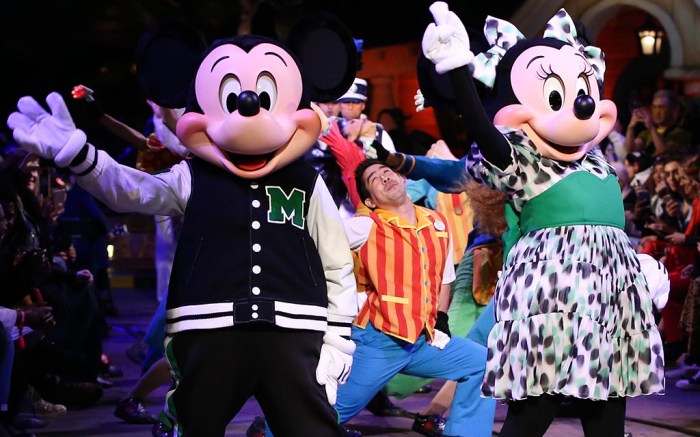 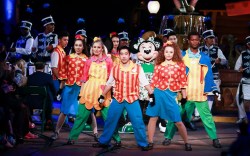 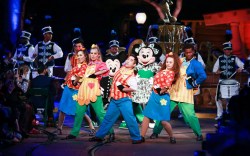 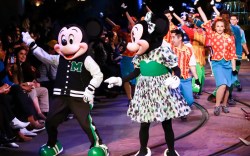 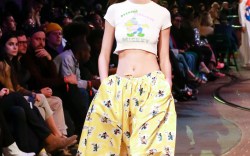 Opening Ceremony brought a touch of magic to the catwalk with the happiest fashion show on Earth at Disneyland — an apt venue for its collaboration with the Mouse. The last time Disneyland held a fashion show was 40 years ago.

Founders Carol Lim and Humberto Leon shut down the Anaheim, Calif., theme park’s Toon Town section on Wednesday to present a true fantasia of head-to-toe styles for spring ’18 that channeled 1970s optimism alongside a new collection with Disney inspired by early sketches of Mickey Mouse.

The nostalgia and affection for Disneyland’s most famous ambassador was no coincidence for the duo — Leon donned a Mickey Mouse tie and cummerbund to prom, and both Lim and Leon are California natives born in 1975.

For spring ’18, the footwear sparkled with two glittery silhouettes in collaboration with Birkenstock on slides and clogs. The unisex styles were done in silver and millennial pink shown with chunky gray midcalf socks.

The shimmering effect continued with low-top La Cienega sneakers covered in allover glitter — seen in ice blue, violet, blue-green and plum — down to the outsole where “Opening Ceremony” was embossed in each shoe’s respective color.

The Western boot trend embraced by brands for fall ’18 fashion shows stomped down Disneyland in midcalf cuts designed in white and black, with ribbed side gores and chunky shock heels.

And a collaboration with Buffalo proved to have plenty of sole with height-boosting reflective boots in white and silver colorways, as well as pink sneakers with white piping.

Mickey’s prints appeared on silk dresses, poplin gowns and throughout the collaborative range in playful ways. A cold-shoulder white maxi with a large print of Mickey’s body was positioned below the neck — creating the illusion of one’s face on his figure.

Humor was not lost in the collection — just look to a similar effect in a white blouse that incorporated puffed sleeves in the silhouette of Mickey’s ears. The look was teamed with trousers and pink kicks. Elsewhere, Snow White got a subtle nod with a puff-sleeved dress that was also paired with pink sneakers.

For some sizzle, a black deep-neck minidress split down to the navel featured outlines of Mickey’s body on each side of the bodice. The look was accessorized with a pair of Buffalo x O.C. reflective boots and a metallic necklace done in three hoops resembling the shape of Mickey’s face.

The men’s styles featured slick jackets such as one in denim emblazoned with Disney script and matching trousers. Equally magical was a wool varsity jacket with Opening Ceremony and Mickey patches.

Drummers and trumpeters played a version of the “Mickey Mouse March” — the same song used in intros for “The Mickey Mouse Club” series — when Mickey and Minnie arrived to boogie with models at the close of the show. The final bow of the presentation concluded with Leon and Lim running hand in hand alongside Mickey and Minnie under a spray of multicolored streamers.

As the old Disney refrain goes: “It was all started by a mouse,” and fittingly, that’s how the show ended.