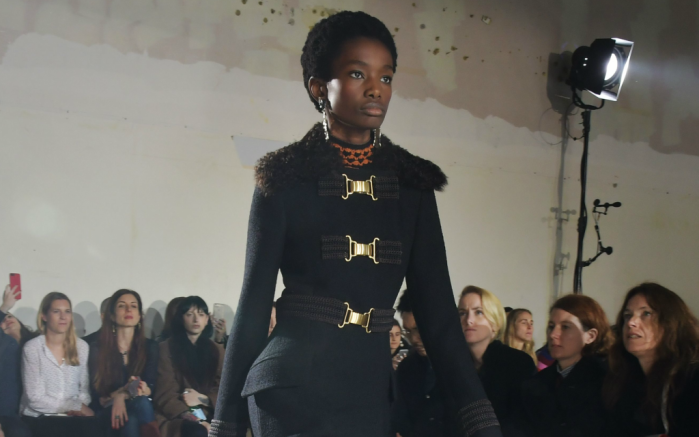 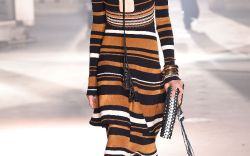 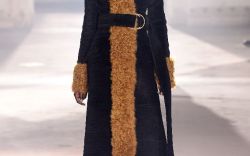 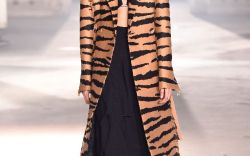 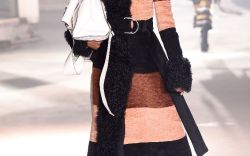 Jack McCollough and Lazaro Hernandez of Proenza Schouler presented their fall ’18 collection in Paris yesterday. And although it was ready-to-wear as opposed to couture, they chose the forum of Paris Haute Couture Fashion Week to express themselves, as they “wanted the hand to be very evident,” noted Hernandez. “The whole collection was about craft.”

Paris is known for its “petites mains” (French for “little hands”), referring to the skilled craftspeople who work in the ateliers of the City of Light. And the designer duo drew inspiration from both local Parisian artisans and traditional American craftmanship.

“We played with crochet and macrame,” said Hernandez. ” We started with the clothing and then worked it into the accessories as well.” One of the collection’s hero styles was a macrame leather pump. It came in both tan and black and also black and white, featuring a rounded toe and chunky block heel in a contrast shade.

Elsewhere, reflective metal details embellished pointed pumps, while booties that buttoned at the ankle jangled with every step.

“We were playing with a new eclecticism — ideas and thoughts and memories from both the East and West coasts of the United States, and Europe,” McCollough said. “It’s a global community these days, so we brought lots of bits and pieces from all over the world into this big mashup.”

Silhouettes were similarly varied and ranged from platforms to flats. “We didn’t just want to focus on one silhouette. We wanted it to be eclectic with flats, boots and pumps, and experiment with hardware and different heel sizes,” Hernandez said. “Our shoe collection is now pretty wide, so we wanted to show that. We’re expanding it big-time. It’s a growing category for us.”

Click through to see the entire Proenza Schouler fall ’18 collection.