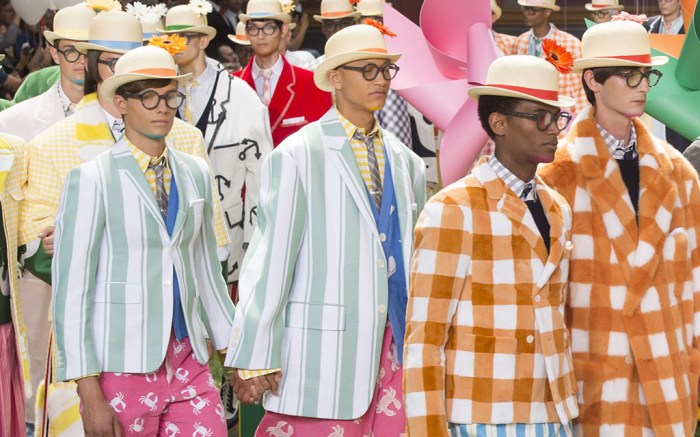 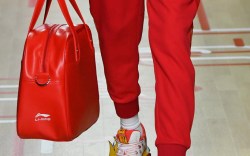 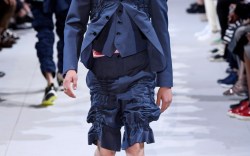 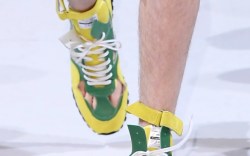 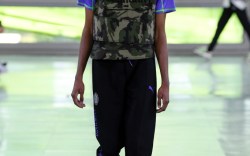 While Olivier Rousteing took a cue from the past in his Michael Jackson-inspired spring ’19 collection, other brands were banking on the future for Paris Fashion Week Men’s. Moon boots, 3-D components and colossal platforms were notable standout design elements among the typically sneaker and loafer-dominated landscape.

Here, FN rounds up five of the craziest styles presented throughout the week.

At Valentino, creative director Pierpaolo Piccioli went for a print, pattern and color explosion including camo, leopard print and the ever trending all-over logos. Thoughtfully, the shoes were color-coordinated in matching solids (army green, white and black primarily) while fuzzy adornments provided quirk. The green and white chunky pair with its contrasting bubble-gum pink fur stole the show.

Is it officially time for men to get in on the western boot trend? Maison Margiela thinks so. In fact, the label is pushing the idea in a big way across several colors including silver, gold and black patent leather. Its powder blue version — also in patent leather — is arguably the most daring of the bunch.

Not sure if Rick Owens also got the Michael Jackson memo, but the designer certainly is leaning into the Moonwalk idea, perhaps in a more literal sense. For spring ’19, Owens sent down a number of space boot-like Birkenstocks, featuring puffy, oversized tongues and metallic velcro straps. Paired with denim shorts in one of the runway looks, the chunky style needs minimal clothing to stand out.

Leave it to Thom Browne to subvert the idea of menswear and infuse it with a whimsical approach. For spring ’19, the imaginative designer embarked on a fairytale land of clownish, yet sophisticated suits. Long printed coats, a hodgepodge of bright patterns and exaggerated oxfords comprised the collection. The towering platforms featured striped bottoms with a color-blocked upper.

Li-Ning is pushing its international presence, and bringing along a bold shoe assortment in its wake. This season, the brand staged its first Paris Fashion Week show where it zeroed in on the dad sneaker in an array of neon brights. For newness, Li-Ning took the futuristic approach by way of 3-D design elements on its Furious Rider sneakers. Protruding flames peek out from the shoe’s outer, giving credence to the style’s name.

Click through the gallery for more of the craziest shoes from the week.