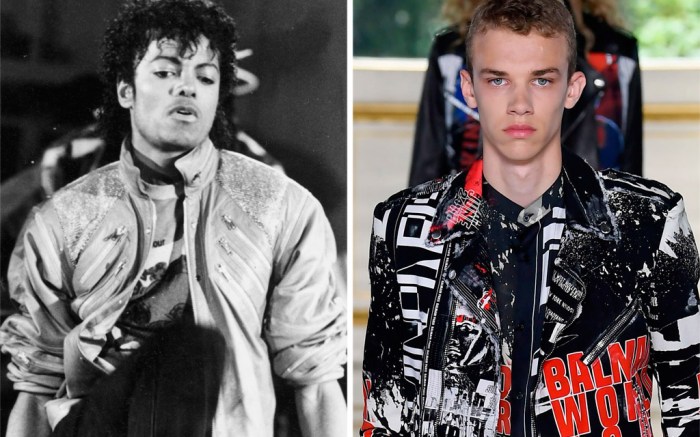 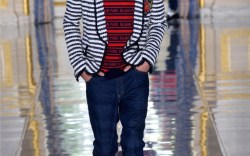 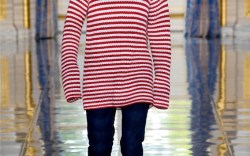 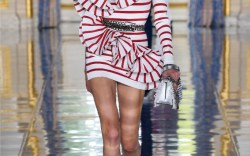 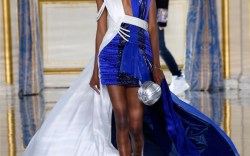 Olivier Rousteing’s Balmain spring ’19 collection was an ode to Michael Jackson. And what could possibly be more representative of the music legend than that iconic black loafer and white sock combo? Not least because he wore them to debut the Moonwalk dance move during a performance of “Billy Jean.”

Today in Paris this combination was a leitmotif — whether in plain black or remixed in graphic black/white or lunar black/silver. There was also a buckled boot homage to Jackson’s “Bad” album cover look.

When it came to the high-top sneakers, which evoked Michael J. Fox’s “Back to the Future,” look, the connection was more lateral. His Marty McFly character was a Jackson fan and Jackson himself even made a cameo in the movie’s sequel.

Rousteing’s collections are always music driven, but this time the inspiration felt much more personal.

The designer, who is currently filming a biopic, was adopted as a child by a white family and grew up in the French city of Bordeaux.

As he revealed in his show notes, “for me like so many kids in the ’90s, Jackson’s music has always offered an uplifting celebratory message of hope and the possibility of needed changes.”

“During the same period that much of the fashion world focused on a vision of exclusivity for those who didn’t look like me, Jackson put forth a powerful and compelling alternative message of inclusion based on breaking rules and pushing boundaries.”

Click through the gallery to see the full Balmain spring ’19 collection.